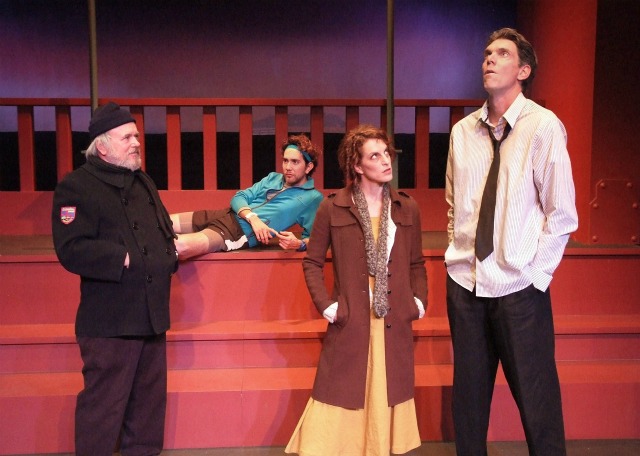 Richard Raskind's suicide parable, The Bridge Club, is playing at Deaf West Theatre in North Hollywood. Set on San Francisco's iconic Golden Gate Bridge during a classically cold and foggy Bay Area night, Raskind's play takes a look at several suicide narratives pitted against one another as self-perpetuating cross-currents. While The Bridge Club is at times undeniably cheesy and surprisingly warm-and-fuzzy for a drama about a bone-crushing 220 foot death jump, the work is entertaining and easily able to keep audience attention at full mast.

The opening scene of The Bridge Club depicts central character Jack, a terminally ill cancer patient with an otherwise mundane existence, during his supposed final moments at the infamous Golden Gate Bridge suicide jump-spot. As Jack ties up a few loose ends and leaves instructions for his loved ones via voicemail, another potential jumper, Sue, emerges. Conflict over who is going to jump first quickly turns to reciprocal demands for suicide justification, which evolves into deep arguments about love, loneliness, and human self-worth. The grim beginnings of Raskind's work twists unexpectedly into a platonic love-at-first-sight-story draped in a cutesy ghost-story. The plot probably would have benefited from darker, sadder writing, but it is easy to appreciate the bleak suicide facts that speckle the script and the playwright's decision to not pass judgment on the morality of suicide. 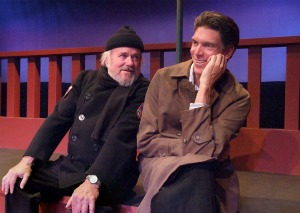 Shelly Kurtz and Christopher Franciosa in 'The Bridge Club' (photo by Ed Krieger).

The production's cast delivers performances that vary in intensity and skill. Playing the main characters, Christopher Franciosa (Jack) and Nancy Dobbs Owen (Sue) give their audience some theatrically rousing moments, but often seem to inconsistently hold feelings in limbo as though they are not fully in tune with their roles. In some ways this approach works because they portray individuals struggling to cope with their niche in life, but at the same time, it makes it difficult for the audience to become concretely engrossed with the plot and emotionally affected by the catalyst characters.

Shelly Kurtz and Andrew Villarreal bring some much appreciated zest into the production through their supporting roles. Kurtz projects a soothing, almost buttery sort of warmth and ease as suicide prevention night watchman, Harold. He is softly magnetic and perfectly charming. Villarreal brings effective comedic relief as Sebastian, an eccentric multiple-diagnoses schizophrenic. He is a bright, funny, and vivacious, although the role suffers from the simplistic device of portraying the mentally ill as super-quirky to indicate their mental status. It is impossible to know whether the writer, director, or actor made the cliche crazy character call to arms, but it is tacky and unrealistic.

Mike Sabatino's direction adequately propels the story and ensures that the play's surprises are not prematurely revealed. Sabatino's staging is not perfect, but it works and makes broad, natural use of the stage. Set design by Dave Blass and lighting by Peter Strauss are simple, effective and create a good sense of time and place. There is no credit for costuming for this production, but the costumes are a perfect reflection of the work's characters and really do recall the style palate of San Francisco.

The Bridge Club is playing at Deaf West Theatre through May 13. Tickets are available online or via phone at 323-960-7711.