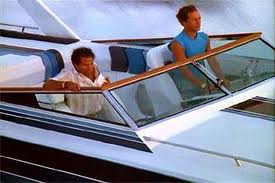 "Miami Vice"
An ocean pursuit off the coast of Malibu late Tuesday night ended in the arrest of three suspected drug smugglers.

The action began when Los Angeles County lifeguards notified the sheriff's Malibu/Lost Hills at about 10:30 p.m. they had spotted a suspicious boat with possible contraband aboard about 50 feet off Latigo Beach, according to City News Service.

The vessel was confirmed to be a panga boat ("a type of modest-sized, open, outboard-powered, fishing boat common throughout much of the developing world, including Central America, the Caribbean, parts of Africa, the Middle East, and much of Asia," per Wikipedia) and deputies with the LASD gave a shout to the U.S. Department
of Homeland Security.

Witnesses say they spotted people aboard the panga dropping "large bundles" overboard before the boat left the shore.

To track the panga and its occupants, the DHS deployed their air and marine unit, which caught up with the boat about two miles out at sea.

Three men were taken into custody, and the DHS is handling the investigation.

UPDATE 11:14 AM The smugglers have been ID'd as Mexican nationals, but their names have not been released. The suspects are being presented for prosecution on federal drug smuggling charges, says Virginia Kice of U.S. Immigration and Customs, who adds that the U.S. Attorney's Office in Los Angeles was "very aggressive'' and "proactive'' in prosecuting maritime smugglers, according to CNS.

Those bundles being dumped from the panga during the chase were marijuana bales, weighing about 20 pounds apiece. "So far, the U.S. Coast Guard has recovered more than 80 bales of marijuana, and the search is ongoing at this time," says Kice. The pot is valued at over $1 million.

Ed. note: The headline of the story has been changed to include the new information made available.