Impressive Mess of Aesthetic Brilliance: 'Eternal Thou' at Atwater Village 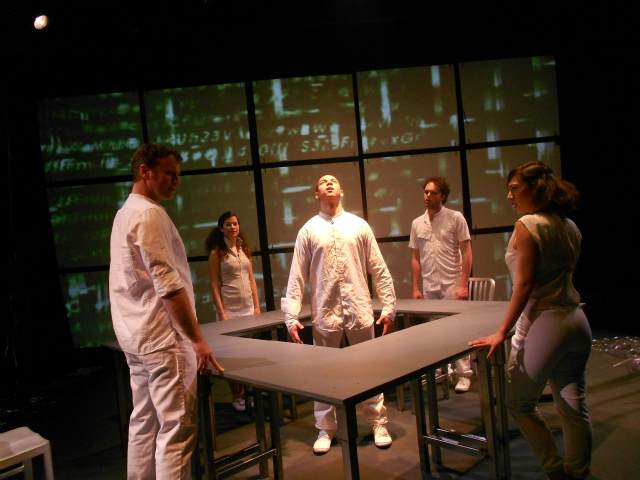 Matthew McCray's new sci-fi drama, Eternal Thou, is playing at Atwater Village Theatre. The experimental piece explores existentialist philosophy through the lens of net neutrality, the flowering of telecommunications, and an ontological conception of god. McCray's work is an impressive hot mess of aesthetic wonderful and far-reaching thought-scapess staged through a thoroughly deft cast.

Both fascinating and fun, the play is an intricate theatrical trip through space, time, and the unstatic microcosms of communications technology. The script is quite dense and subtly genius, which makes this brief description of McCray's play seem somehow inadequately descriptive, so try to imagine what a theatrical love-child of Tron and David Byrne's True Stories would be like, and you will be well on your path to grasping Eternal Thou.

The ensemble cast is poised and graceful with an undercurrent of sarcastic bite. Without ever leaving the stage, they move from scenes where they play standard human characters, then embodied metaphors for communications components, and finally a Greek chorus of abstract paradigms. The hypnotic Vonzell Carter portrays the central role of Channel with enveloping gracefulness and intriguingly fragile composure. Rachel Appelbaum is playful, cheeky, and often hilarious as the openly feeling Receiver. Liam Springthorpe brings energetic precision to the role of the Message. In the role of Sender, Jenny Greer draws the audience into a strong portrayal of Sender through sharp comedic timing and possessed command of character. Finally, Jeffrey Johnson's poised rendering of Feedback is full of gentle masculinity and carefully reserved release. 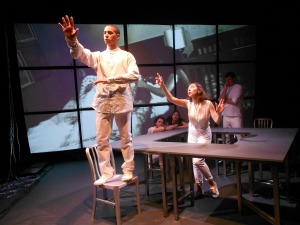 Vonzell Carter, Liam Springthorpe, Rachel Appelbaum, Jenny Greer and Jeffrey Johnson in 'Eternal Thou' (photo by Matthew McCray).
In addition to writing the script, McCray also serves as director for Eternal Thou. His direction is sophisticated, precise, and densely choreographed. McCray culls unexpected emotion through his work. For example, a brilliantly haunting scene recalls the advent of automatic phone dialers, lets the audience experience a déjà vu shock from the forgotten dial tone as it approaches the verge of extinction. And toward the end of the play exists a crazy musical scene that is a quirky and supremely pleasurable measure of sheer joy on crack.

Scenic design by Sarah Krainin, projection design by Adam Flemming, sound design by Sloe Slawinski, costuming by Ariel Boroff, and lighting by Ian Garrett's culminates into an intense and artfully staged feast for the eyes and ears.

Eternal Thou is playing at Atwater Village Theatre through April 29. Tickets are $17 to $25 and available online or at the door.