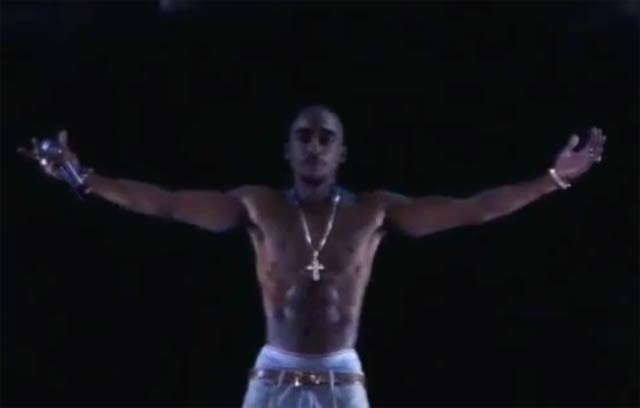 Those rumors of Tupac Shakur playing Coachella were true: A hologram of the slain rapper turned up alongside Dr. Dre and Snoop Dogg to close out last night's performance... and it was moving—at least for Katy Perry, who Tweeted, "I think I might have cried when I saw Tupac. #coachella"

Pop & Hiss recounted the evening, which also included 50 Cent and Eminem. Their criticisms are being echoed in a lot of outlets today:

New York rapper 50 Cent arrived to do bits of his early classics—"Wanksta," "P.I.M.P." and "In Da Club"—and the masses were enthusiastic and welcoming to our East Coast guest. Eminem waltzed out casually, his hoodie pulled up, to salute Dre's work with some verses —the best of which was a snippet of "Forgot About Dre," a Dre track from 2001. Snoop and Dre honored the late singer Nate Dogg, the soulful singer who provided hooks on some of G-funk's classic jams as well.

The Tupac hologram? A red herring, unnecessary and ill advised. His abs still looked great, it's true, and there was a certain spring in his step as he and (the living) Snoop rapped their collaboration "2 of Americaz Most Wanted." But when the hologram rhymed the line, "my intention's to get richer," well, we know how that ended up.

See it for yourself below. Is this the first performing hologram to hit a stage? Many years ago Ike Willis told us that Frank Zappa had hoped to do the same thing when he was still alive—with holograms allowing him to play multiple shows at one time.