4,000 Bikes Will Be Coming to a Kiosk Near You Thanks to City's New Massive Bike-Sharing Program 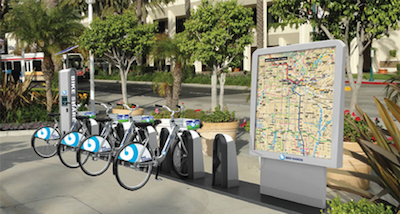 Sample kiosk via Bike Nation's website
We're not used to covering a ton of breaking news outside the criminal beat on a Sunday, but Mayor Antonio Villaraigosa chose today's bike-centric CicLAvia as the perfect opportunity to announce that the city of Los Angeles would be getting its own bike-sharing program.

Bike Nation will be bringing 4,000 bikes to 400 kiosks around downtown, Hollywood, Playa del Rey, Westwood and Venice Beach over the next two years, according to the Los Angeles Times and Streetsblog. The program will cost Bike Nation $16 million and the city nothing.

Villaraigosa explained: "In tough economic times like these, we knew it wasn’t feasible to start a public bike share program. But we know it’s what LA needs. As we’ve seen with CicLAvia and 'Carmaheaven,' Angelenos are aching for a day without a car."

These bike-sharing programs—which have popped up in Paris, Portland and Minneapolis—allow users to swipe a credit card and rent a bike for a short jaunt from one (hopefully) well-placed bike kiosk to another. The idea of bringing a bike-sharing program had been batted around before as early as 2008, Streetsblog notes, but city leaders didn't think we were ready. Villaraigosa thinks the time is now: “We’re building the infrastructure; we’re making it safe and practicable."

The bikes are made without a chain and they have special tires that are supposed to resist getting flat. The bikes come with GPS technology, which will help track down thieves but may also help you find another kiosk. Helmets not included.

The Los Angeles program is very ambitious in its size. Washington D.C. and San Francisco have systems with 1,200 bikes each, according to Streetsblog. Chicago has a system with 3,000 bikes. New York's program, which isn't online yet, will have 10,000 bikes.

Santa Monica and Long Beach already have plans in the works, but it's not clear yet whether Metro will be able to be ensure that bike-sharing programs like these will work across municipal lines throughout the county.

Related:
A Well-Organized Bike-Sharing Program Could (Finally) Be On Its Way to Los Angeles County