Weekend Movie Guide 04/13: The Woman Locked Out in the Woods 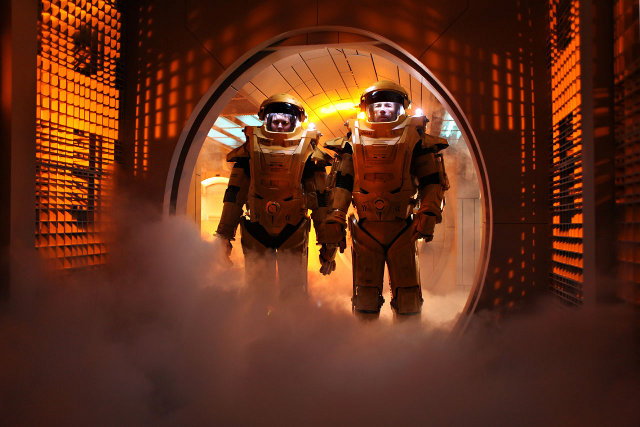 TGI Friday the 13th! Today, we stalk a group of friends into the forest to meet certain doom - not from hockey-masked hero villain Jason Voorhees, but The Cabin in the Woods. The internet loves the long-delayed picture. No surprise there, as writer/director Drew Goddard is a longtime collaborator of film/comic icons JJ Abrams & Joss Whedon.

Whedon produced & cowrote Cabin on the way to assembling The Avengers. If that's not a strong enough comic book connection, the mighty Thor himself Chris Hemsworth headlines the cast, which also includes Gray's Anatomy heartthrob Jesse Williams, Fran Kranz (of Whedon's Dollhouse & droll satire The TV Set) and relative newcomers Kristen Connolly & Anna Hutchinson. For a film already touted as a game-changer, the trailer's a bit spotty, but it's got mad scientists, monsters & laser fences, so I'm in.

The Cabin in the Woods is a walk in the park compared to Lockout. The over-the-top action film requires Guy Pearce (Memento) to break into the world's most secure prison to rescue the President's daughter (Maggie Grace, Taken again...) after the inmates take over the asylum. The kicker? The world's most secure prison is in outer space! With its outlandish mercenary-on-a-mission scenario and flamboyant prisoner gangs, Lockout recalls the 1981 classic Escape from New York (or, if you're locally inclined, its 1996 sequel Escape from LA). Let's hope this film is as big, dumb & fun.

The Woman Who Wasn't There chronicles a stranger-than-fiction New York escape that's truly shocking. Tania Head worked on the 78th floor of the World Trade Center, and was one of a handful of lucky souls to survive the September 11th attacks. Her miracle quickly turned to sorrow when she learned her fiancee never made it out of the other tower. But by far the greatest tragedy is that none of this actually happened. Alicia Head, better known as "Tania", was a Spanish business student who entered our country for the first time in 2003. How was she able to deceive a nation - and why?

Documentarian Angelo Guglielmo began filming interviews with Head, then the face of 9/11 survivors, for what he thought would be a truthful tribute to resilience. When she was exposed as a fraud, his cameras kept rolling, allowing unprecedented access to a web of lies as it comes unraveled. The Woman Who Wasn't There opens exclusively at Laemmle's North Hollywood, in advance of its television premiere Tuesday on Discovery ID.

That's all for this week. Remember, a theater's nice, warm & dry.