Yes, People DO Walk in L.A.: And Now Walkers Have Their Own Advocacy Group 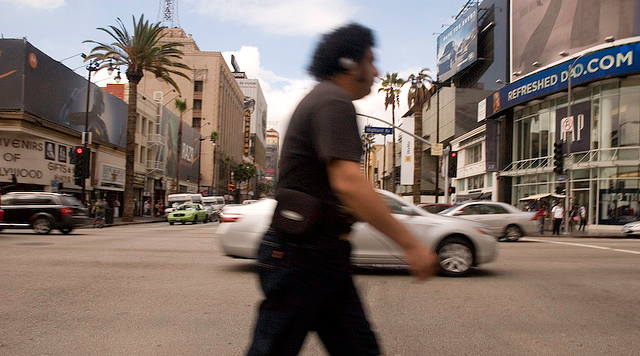 Photo by delara-photos via the LAist Featured Photos pool

Forget what Missing Persons sang or what Joan Didion wrote. People in Los Angeles do get off the freeway and use their own two feet to get around (even if they're just walking to a parking spot)—and now there's a new group in town aiming to make the city safer just for them.

It's true, Los Angeles has a deadly reputation for pedestrians, but Los Angeles Walks is the first city-wide pedestrian advocacy group hoping to change that. The all-volunteer group recently launched a website. It points to the recent deaths of pedestrians (like Ashley Sandau) and explains its mission this way:


The crazy thing is that until now there has not been a city-wide pedestrian advocacy group in Los Angeles that would work to bring awareness and change after these kinds of incidents. There are plenty of groups like this for bikers, for example, but not for walkers. And everyone, I would argue, is a walker in LA, even if you're just walking to your car.

As one part of our 2012 campaign, we are focusing on the dozen or so most dangerous intersections in the city and will be working to recommend improvements to those intersections, from road diets, to crosswalk design, to policy changes, to better wayfinding. Our hope is that this kind of work will serve as an example for communities across LA who want to implement similar changes in their neighborhoods. We truly believe that designing streets and sidewalks that are safer for pedestrians will make them safer (and healthier, and more enjoyable) for everyone in LA.

The group was launched by Deborah Murphy, an urban designer, Jessica Meaney, who advocates for Safe Routes to School, and Alexis Lantz with the Los Angeles County Bicycle Coalition.

Interested in getting involved? You can talk to the group at CicLAvia, and later on this month the group will be hosting a karaoke fundraiser. The fundraiser kicks off on Saturday, April 21 7 pm at Atwater Crossing
at 3245 Casitas Avenue. For more information, check out the group's website.

You can practice singing that song:

Related:
When it Comes to Walking, L.A. is More Deadly than Other Cities
Another Walkability Survey, And Why We (Don't) Walk in L.A.