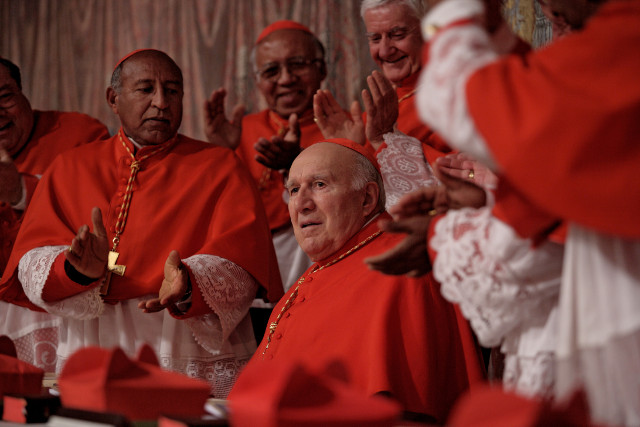 Michel Piccoli in WE HAVE A POPE, opening exclusively at The Landmark. Courtesy Sundance Selects. Photo Credit: Philippe Antonello.

Speaking of NPH, there's an entire generation for whom How I Met Your Mother will be explained with "making out during Titanic, retrofitted her in 3D & cast her off again. Save a single edit, it's the epic you remember, in more dimensions than you can ever imagine. If you're unfazed by the ballad of Jack & Rose, you can always trust Cameron to unlock the mystery of ocean depths while preserving its menace.

In limited release, it's hard out there for a Pope, when there's millions counting on you for their hope. That's the chorus of We Have a Pope, opening exclusively at The Landmark. Italian director Nanni Moretti's film boldly presents the religious leader (& his potential successors) as a fallible human being. The story concerns a conclave of cardinals gathered in secret (albeit besieged by media) to elect a Pope, the anxiety of Papa-to-be Cardinal Melville (Michel Piccoli, Belle de Jour) who bolts before his first address, and the Vatican brass who has to save face to save faith. This is neither a smear on the Pope nor critique of Catholicism, but a good-natured satire that shows those revered as closest to God may be the most human of us all.

To illustrate, We Have a Pope opens with Cardinals from all corners of the world marching in solemn procession, narration naming each one & speculating on their likelihood of getting elected. It's soon revealed this comes from a thick-headed reporter on the scene, discussing global consequences with the gravitas of a sports draft. When a Vatican spokesman asks them to leave, the reporter's "story" shifts to faux outrage that the news media aren't even allowed to sneak a shot of the Sistine Chapel. The sequence neatly demonstrates the struggle to maintain secret, thoughtful processes in a 24/7 transparent culture that wants everything 15 seconds ago. It's enough to drive anyone batty, particularly a quiet, older man who already has misgivings about how his life has gone.

But its deliberate pacing put me in the uncomfortable position of leaning towards the reporter's mentality. The art direction is rich, the dialogue ponderous, the Buñuelian absurdity of a papal volleyball tournament hilarious. But must we sit through an entire procession? Why can't they go next down the line - doesn't the presence of a huge crowd spur solutions now? Ultimately, We Have a Pope is touching, pointed & worth the wait, but be warned that there is a wait, especially on the front-end.

That's all for this week. What will you sink your money into this weekend?