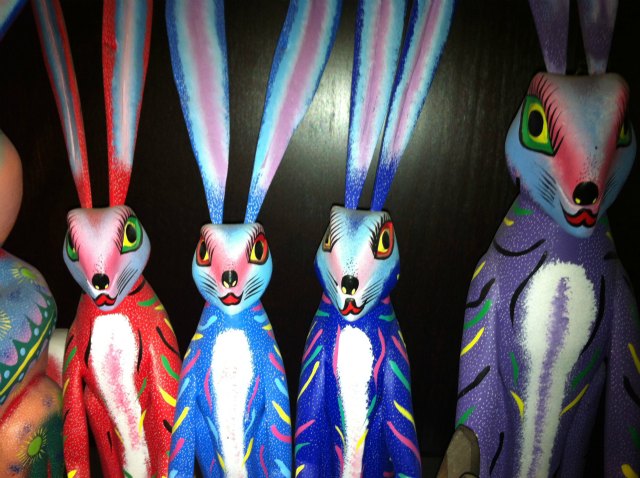 Wooden bunnies from Mexico at the Bunny Museum (photo by LAist).

Pasadena is home to the Bunny Museum, a world record holding living museum that houses thousands upon thousands of bunny knick-knacks, trinkets, and tchotchkes. This wonderful little curiosity spot is housed within the walls of a quaint residential Victory Park cottage nestled at the foot of Mount Wilson. After arriving at the Bunny Museum, LAist drew a chalk bunny in the garden and fed cilantro to the some adorable house-trained pet bunnies. Then we spoke to Bunny Museum owner Candace Frazee about love, obsession, cult status, and of course, the Easter Bunny. Frazee graciously let us borrow a fuzzy white bunny-shaped hat for the occasion:

LAist: What inspired you to create the Bunny Museum?
Candace Frazee: Couples tend to have pet names for one another. I call my husband (Steve Lubanski) my honey bunny. Calling Steve honey bunny was really just me being cute and Steve liked it, so he gave me a bunny for Valentine's Day. And then I gave him a Bunny for Easter. And before you know it, we were giving each other a bunny every day. Our joke is that if I had called him my cute little frog, that this would have been a frog museum.

So do you have to do a bunny census every 12 years?
CF: Oh no. I have all of my bunnies inventoried in a computer.

What are some of the highlights of your bunny collection?
CF: Did you see Elvis Parsley? Also the first and second bunnies that started our collection. Our real bunnies, of course. Our freeze dried bunnies that have passed away. And we have eight bunny floats from the Rose Parade that were donated to us. Did you see the Garden of Broken Dreams? (That is where the broken bunny statues go.) And we renovated our cactus garden. We put our big Rose Parade bunnies in the cactus garden. We call it "The Litter Box."

The Bunny Museum is in your house! What is it like to live in a Bunny Museum?
CF: Yes, the Bunny Museum is a living museum. We have been doing it for 19 years, so we don't even think twice about it. We're used to it. People that come here freak out because they see so many bunnies, but the collection grew so gradually that we didn't feel a difference. We have a table, a toilet, and a telephone just like everyone else. Our stuff just happens to be bunny-shaped. We even have bunny-printed toilet paper. It is not as hard as you might think. The only real difference is the visitors. People are coming and walking through. But we love the visitors! 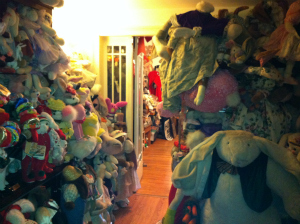 A small portion of the bunnies at the Bunny Museum (photo by LAist).

How do you gear up for Easter at the Bunny Museum?
CF: We have bunny skipping ropes and bunny bowling and lots of buckets of chalk so that people can draw bunnies up and down the driveway. So it is really just more of what we do on an everyday basis.

Why do you love bunnies so much?
CF: It is because I love my husband. It is literally just our love story that you are seeing. Within a marriage you should communicate and do something together. So Steve and I do this together. We have fun shopping together for bunnies. We actually had our bunny collection for four years before we got live bunnies because we were afraid that our cats would not get along with them. But as you can see, we have cats and bunnies now, and they just ignore each other.

Would you say that you are obsessed with bunnies? When did your bunny obsession begin?
CF: Everyone thinks that we are obsessed with bunnies, but we're not! A few things came from family and the public, but for the most part you are just seeing gifts between Steve and I. I love when he gives me a bunny gift because he thought about me. It is not an obsession or an odd thing.

The Bunny Museum is home to live bunnies too! What can you tell LAist about your pet bunnies?
CF: Inky and Monterey live at the Bunny Museum. They like visitors because they know that visitors bring them things to eat, but they are also independent. If they have had enough petting for the day, they go hide and take care of themselves. We also have three more bunnies that live at our bunny store. And did you see our freeze dried bunnies?

There isn't a cash admission fee for visiting the museum, but you do request that visitors bring food for Inky and Monterey. What kind of snacks do bunnies like to eat?
CF: Any fruit or vegetable, but their favorite food is kale. Basically anything that is really bright and healthy. Iceberg lettuce is not a good bunny food because it is mostly just water. Spinach and broccoli are better choices.

Is the Bunny Museum good for children? What do parents need to know before bringing their little ones here?
CF: We have no problem with children here just so long as there is one adult supervisor for every four children. Parents worry that their children will touch the bunny collection, but they generally don't. Actually it is usually adults that touch our collection when they are not supposed to.

What is your favorite part of running the Bunny Museum?
CF: Meeting people like you because you are wearing bunny ears and you did a great chalk drawing too. It is really fun meeting people because they come from all over the world and everyone, even if they don't speak English, says "Wow! Wow! Wow!" We get people coming in limousines, trailers, and people walking up from the bus. We get visitors of all ages and nationalities. We get pre-school classes and also university photography classes. We had no idea that the bunny would reach so many people!

Do you worry about letting so many strangers into your home?
CF: A lot of people think that, but we do not allow coats, bags, or hats inside of the Bunny Museum to prevent things from getting knocked off of the shelves. And we have cameras in all of the rooms so we can see what is going on. Breakage is more worrisome than stealing. People will say "Oops, sorry!" But sorry doesn't cut it because it is too late, the bunny is broken. So no, we don't worry because we have ground rules and we are very strict about those rules.

So what you're saying is, don't mess with the Bunny Museum
CF: Yes, hahaha.

Do you know that you are a local cult icon with a cult following?
CF: Noooooo. I did not know that!

Yes. It is true. You should Google yourself.
CF: Wow! That is very cool! Thank you for telling me. I didn't know that. I know Atlas Obscura likes us. They came one time and they liked the Bunny Museum so much that they are coming again for Obscura Day on April 28 when people around the world celebrate taking trips to obscure places.

Is there more to Candace Frazee than bunnies?
CF: Oh, of course there is more to me than just bunnies! People think that this is my whole life. Even though it appears to be, it is not. It is just one of the things that Steve and I do as a couple, and we share that part of our lives with others.

Have you ever seen Donnie Darko? Because seriously, that is like the best bunny movie of all time ever.
CF: Hahaha! We do own it and I have seen it. It is pretty wild.

Where exactly does the Easter Bunny live? He seems pretty elusive. Does he live here at the Bunny Museum?
CF: He does...but they all do. The Trix Bunny. The Nabisco Bunny. They all live here.

Have you ever considered starting a feud with Hugh Hefner's Playboy Bunnies for encroaching on your Los Angeles bunny territory? Do you have beef with those bunny impersonators?
CF: Oh, that's funny. Oooooh nooooo. No need to do that.

How can the average person bunnify their life? Is bunnification a path to enlightenment, truth, and love?
CF: Oh, you are so funny! The quick answer is yes because bunnies are very docile and sweet, but they will fight for their territory. If someone steps into their territory, bunnies first retreat, then they fight to protect their space, but only if they absolutely need to. And that is how people should be.

Peace first!
CF: Yes. Don't start a fight, but protect your loved ones if you need to. Also, bunnies are very sweet and cute.

Everyone should try to be sweet and cute.
CF: Exactly! 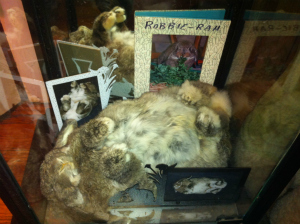 Rest in Peace, Robbie-Rah. Freeze-dried, deceased, beloved pet bunny at the Bunny Museum (photo by LAist).
What challenges does the global bunny community face in 2012?
CF: The main problem is that after Easter people dump their bunnies. People need to research bunnies before going to get a one from a pet shop for Easter. I don't recommend getting a bunny for a pet unless you are willing to vacuum every day because they shed a lot and can make a mess with their litter box. Also, they chew everything! They have to chew because their teeth grow constantly, sort of like how our human nails grow constantly. If their teeth grow too long, they can die from starvation and dehydration because they won't be able to eat or drink. You have to give bunnies lots of wood, cardboard, and hay to chew so they won't die. Pets make life more fulfilling, but people need to know that bunnies are a BIG commitment. If you do decide to get a pet bunny, you should adopt a bunny from the Humane Society because they are already neutered. Bunnies from pet shops are not neutered and they can easily reproduce every month. If you have to take a bunny to the vet to get neutered, it costs a lot of money.

When LAist called to make an appointment to visit the Bunny Museum, you told us to "Have a hoppy day!" Do you know any other cool bunny puns?
CF: I know all of them. Hoppy Christmas! Hoppy Birthday! Hoppy Valentine's Day. We don't say "happy," we say "hoppy." When Steve and I give each other greeting cards, we always write over the "a" and change it to an "o." I am a hoppy person!

What do you think of this red, flannel, tribal-bunny printed shirt that we found at Goodwill for $1? Does it meet the high standards of the Bunny Museum?
CF: I looooove it!

Thank-you so much for talking to LAist! Um, would you like your bunny hat back now?
CF: This was really fun. Have a hoppy day!

The Bunny Museum is open daily by appointment with several open houses throughout the year. Reservations can be made via phone at 626-798-8848. Visitor information can be found online.