The Federal Reserve and Vampires are Hungry for Fresh Blood in 'The Vault: Bankrupt' 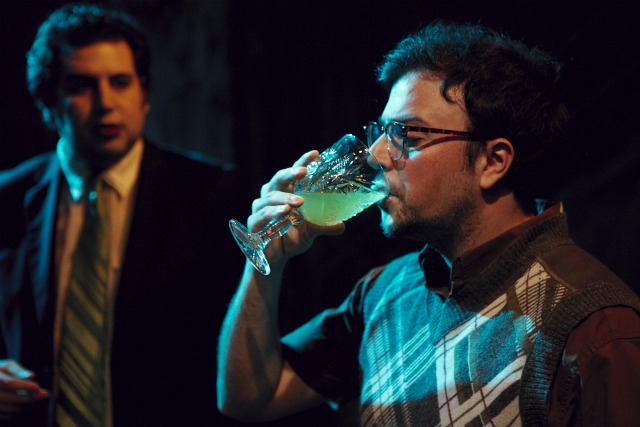 Fidel Gomez and Sam Golzari in 'The Vault: Bankrupt' (photo by Koury Angelo).

The Vault's metaphor-mixing farce, The Vault: Bankrupt is playing at Los Angeles Theatre Center. In this fiscal fable, a humble school teacher takes a loan from a vampirous bank claiming that even life's intangibles, like love and trust, can be bought through a debt-based financial system run by the lecherous undead and the Federal Reserve. The capable theatre group fuses theatre, multimedia, music and dance into an eclectic production built upon double entendres. Watching the The Vault: Bankrupt is like witnessing the awkward love-child of Wall Street and The Rocky Horror Picture Show on its first day at work as a bastardized and modernized 1950s educational film, but, you know, on a stage.

The ensemble cast portrays numerous, often nameless characters, and they move fluidly from campy humor to urgent dramatic seriousness, pushing the audience beyond the formulaic comedic comfort zones that prescribe when to laugh. Sam Golzari plays the central role of the school teacher. Golzari is a strong, pliant lead that folds cautious naive innocence into a personified punch-drunk wild man. In the supporting role of the slick banker vampire, Fidel Gomez is impishly hypnotic. Stephan Buchanan and Vicki Syal are particularly electric and commanding as they finesse their lines into disturbed comedic fortes. 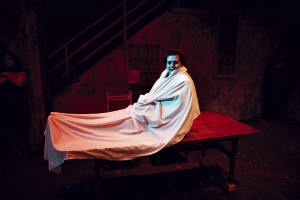 Fidel Gomez in 'The Vault: Bankrupt:' (photo by Koury Angelo)
Under the direction Fidel Gomez and Aaron Garcia, The Vault: Bankrupt is entertaining, yet flurried and unbalanced. There are a few moments of disconnect that disrupt the otherwise cohesive, bell-shaped schematics of the production. The play lingers too long within some scenes and begins and ends on a dry note, but there are some funny moments that bulge out of the middle of the show like an obscenely protruding pot belly. The technical staging elements of the production harmoniously foster the plot, but also seem to recall the almost monochromatic back allies that dot the downtown landscape, which is exactly the sort of poetic imagery that the Vault strives to bring to the stage.