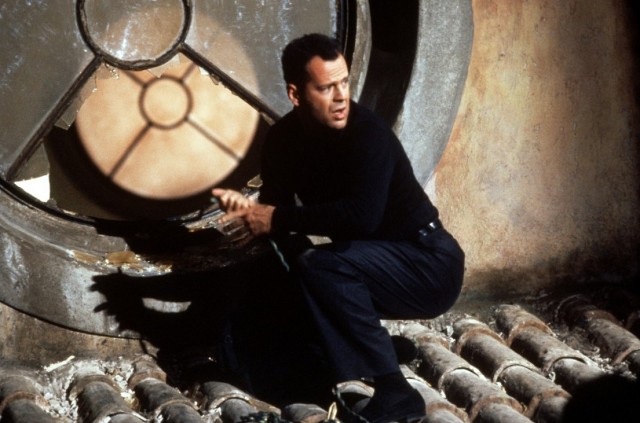 Bruce Willis steals the show in HUDSON HAWK, playing this weekend as part of the inaugural "Something Old, Something New" series at the New Beverly.

Way back when I was a Northern Californian touring colleges, I snuck into a screening at UCLA for students only. I can't remember what it was, but I'll never forget how that print sparkled. Now, UCLA's Student Chapter of the Association of Moving Image Archivists brings that same magic off-campus with the monthly series "Something Old, Something New" at the New Beverly.

The first screening is this weekend's "Reluctant Cat Burglars" double-bill featuring Alfred Hitchcock's To Catch A Thief (Cary Grant and Grace Kelly at their finest!) and cult caper Hudson Hawk (story by and starring a post-Die Hard, pre-Pulp Fiction Bruce Willis!). Screenwriter Daniel Waters has a history of off-kilter comedy and action - Heathers, Batman Returns and Demolition Man - and appears Friday night to discuss all that and more. In keeping with the experience and importance of preservation, all films in the series will screen in 35mm, with Hudson Hawk in particular coming fresh from Sony's archives. Can't wait to see that sparkle again!

Speaking of things old (and new), the documentary Shakespeare High charts the Drama Teachers Association of Southern California Shakespeare Competition. The annual event (the film was shot in its 90th year) enables local teens to reinvent the Bard and rewrite their own, often troubled stories. Alumni Kevin Spacey (who executive produced), Val Kilmer and Richard Dreyfus share their experience with the program, but in a time of dwindling arts programs (as with most modern documentaries, there is an advocacy piece) its true importance is detailed through the former gang members, skinheads and survivors of violence and poverty who take the stage. The film plays all week at Downtown Independent, with cast and crew at select screenings.

Of course, another resurrection is front and center this weekend, and the Aero's got an interesting Easter line-up. Good Friday, they screen Martin Scorsese's The Last Temptation of Christ, with actress Barbara Hershey (Mary Magdalene) in person. Hugely controversial upon its initial release (and still suppressed in several countries), this is followed on Sunday by the first alt-Easter screening I can recall, a pairing of the Jimmy Stewart classic Harvey and Donnie Darko. For a more faithful seasonal screening, rejoice at the Egyptian on Saturday for the epic Ben-Hur.