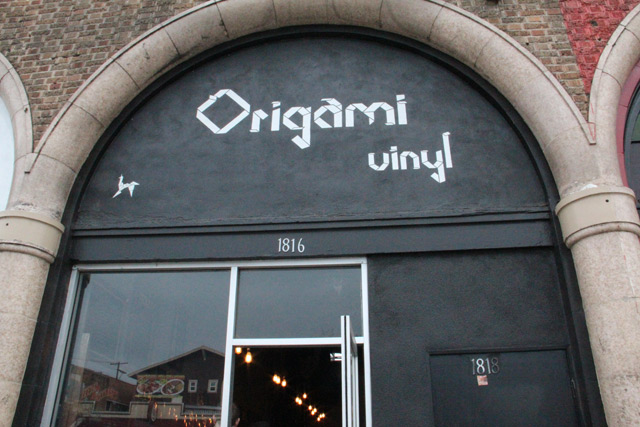 It's hard to believe it's been three years since Origami Vinyl first opened its doors. Since then, the record shop/box office/concert loft has been embraced by the Echo Park community and has hosted some unforgettable events.

LAist: Happy third anniversary! How will you be celebrating?
Neil Schield: Thanks! We're going to do a cupcake potluck Tuesday night at Record Club, which is still going strong at El Prado. People can RSVP on our Facebook page, and we're asking everyone to bring a couple cupcakes and a couple 45s if they've got 'em. We'll be rocking all night—slamming down cupcakes and beer.

Speaking of 45s, I couldn't help but notice the one behind you on display—Jessica Paré (as Megan Draper) singing "Zou Bisou Bisou" from the season premiere of "Mad Men." What a great idea! 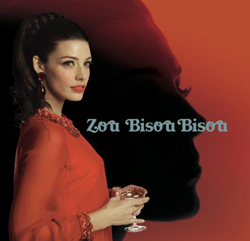 Mad Men's vinyl release of "Zou Bisou Bisou" also includes the Mad Men theme.
Yeah, the "Mad Men" people obviously planned that way in advance, because we got it the day after the show ran. Since the distributor is just down the street, we were the first store in the world to get it, and people went pretty crazy over it. We only have one or two left.

Have you noticed any vinyl trends in the last 12 months?
Just that more and more people are pressing records these days. We're a curated record shop and that's what we thrive on, so we have to be selective about what we bring in and what will fit in the space. So it's making my job a bit more difficult, but that's a fantastic problem to have. When we first opened, there weren't as many options, so this is great. Another trend is that more people are buying vinyl. It just continues to expand—and we see all ages.

What's been one major addition to the store since your last anniversary?
We brought on another employee, Emily, so it's great to have three dedicated staff members. She's shaped some ideas we hadn't had time to focus on before.

Such as?
We started a limited-run quarterly zine, and the second issue will come out on Record Store Day. So when you buy a record in the shop, you'll get a free zine. I think we made 50 of the first issue, and we'll probably make 100 of the second. We focus on local bands, interesting people in the neighborhood, local businesses and of course, vinyl.

It's just really fun because we all grew up on zines in our little scenes when we were younger, so it's cool to bring that back. It's another form of media that seems to be struggling right now—print competing with digital.

This mural looks to be a new addition as well. Who painted it?
We had artist Andy Ristaino add this one. He's one of the lead animators for Adventure Time. 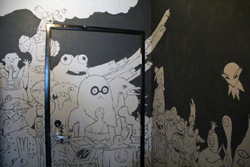 What have been some of your favorite Origami Vinyl loft shows in recent months?
There have been so many amazing shows. Lou Barlow returned to the loft—this time to play a Sentridoh set. That album was essentially a bedroom project of his during Dinosaur Jr. It had only been a cassette release, then he and a friend reissued it on vinyl, so he chose to play his only Sentridoh set here.

One of the bands on the Origami record label, NO, played their first-ever acoustic set at Origami, and that record has just been blowing up all over the place. I'm really happy for them.

With everything going on with Origami, are you still DJing?
Outside of Record Club, I DJ one-off shows. I did Space15Twenty, the NO Residency and an art gallery opening in recent months. I'll also be DJing at the Getty Museum in May, opening for the Dum Dum Girls.

How did the vinyl panel you moderated at the Grammy Museum last year come together?
We'd first done a panel in the store—about how to get a record made. We had Pete Lyman, who does vinyl mastering; Kevin Smith from Bill Smith Custom Records, who runs the plant that presses the wax; Jennifer Freund from Dorado Packaging, who makes the artwork; and Ben Heywood from the band Summer Darling.

We talked about how to get a record made, and it was really informative, but the space was limited to around 30 people in the audience. Then the Grammy Museum and Dublab came to us and said they wanted to take the panel and do it on a much larger scale.

So we pretty much had the same people, then added Peanut Butter Wolf to the mix, and ended up with a packed house at the Grammy Museum. For me, the more people who learn how to make a record, the better!

What have been some of your favorite vinyl discoveries from the past year?
I think the record I've been recommending most, even though it's been out for about a year, is Bill Callahan's Apocalypse. It's rare that a record like that comes along. He's been making albums for a while, but this one really popped for me—the tonality, the lyrics—it's just a beautiful record and I find myself putting it on all the time.

Another band that has been around for a long time, Peaking Lights, put out a record last year called 936, and I find myself rocking that quite a bit.

And Cloud Nothings recently put out a record called Attack on Memory, and it reminds me a lot of the records I was listening to in the 90s—kind of a throwback to the post-hardcore stuff.

Will you be adding any new features to the store in the coming months?
We have some really big new stuff coming. Our online store will be fully functional soon. And our Art Wall is going to turn into a listening station with an iPad, where we'll have 10 featured records every month. Based on what the record labels have told me, it sounds like we may be the only vinyl shop to have a listening station for new stuff.

Which Record Store Day releases are you looking forward to most?
Two I'd definitely buy are the Lee Hazlewood reissue and the flexi-disc from Domino Records.

What are Origami Vinyl's plans for Record Store Day?
We'll have DJs in the shop all day—including Jason Kramer from KCRW, Alyssa Bailey from KXLU and Shaun Koplow from Anticon Records.

Will there be giveaways and listening stations?
We'll have a bunch of giveaways throughout the day. We're partnering with Generic Surplus, which is a rad local shoe company that'll do some giveaways. In addition to that, we've partnered with Eskuche headphones. They're going to do this cool vinyl valet at the Echo, where after buying your records, you can check them in and watch the show without having to carry them.

There will also be vintage receivers, really nice turntables and headphones set up in a private room in the Echoplex, so people can go downstairs and listen to the records they just bought.

Sounds like a full day!
It will be. Last year we opened at 10am and people started lining up at 5am This year we'll be opening at 8am We just want to do as much as we can to celebrate the store, the neighborhood and our customers. It's going to be a blast.