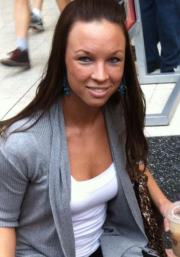 Ashley Sandau (Facebook)
Authorities have identified a pedestrian fatally struck by a vehicle in Silver Lake late Friday night as 24-year-old Ashley Sandau of Canyon Country. The tragic accident happened at around 10:25 p.m. March 30, as Sandau was crossing mid-way from the 2800 block of Rowena Avenue, just steps behind her father, according to City News Service.

Sandau had reportedly been dining Edendale, a nearby restaurant, and was crossing the street when she was struck by a vehicle headed westbound. Her father, who had made it safely across Rowena just moments before, witnessed the accident.

The Eastsider LA has a bit more about the young woman:

Sandau was working as a marketing coordinator while finishing her master’s degree in Integrated Marketing Communications at St. Bonaventure University in New York, according to her LinkedIn profile. A professor at the New York college, which posted a notice of her death, said Sandau came to the school from Germany, where her father was in the military. Sandau was a runner, swimmer and soccer player in college, according to a sports website.

Sandau died of her injuries at the hospital.

"You earned your wings as an angel before you even left this Earth, you will be missed dearly, but I know you will always be there in our hearts until we see you again," posted Sandau's brother Matt on Facebook this weekend.

The driver of the vehicle that struck Sandau was interviewed by police, but was not cited or arrested.