Circle X Gets 'Naked Before God' With Impressive Results 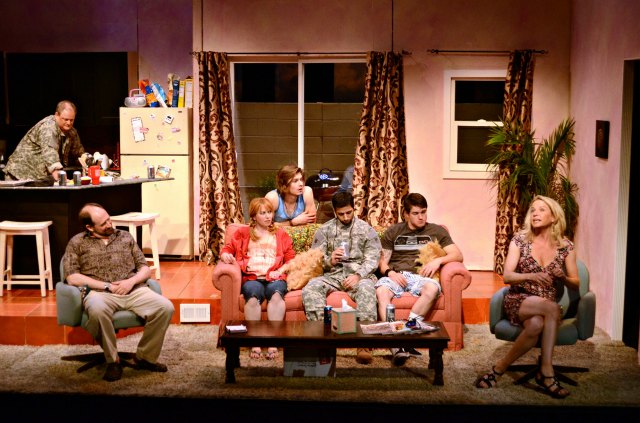 Pornography and religion are pretty obvious targets for satire, so it's no surprise when comedies concerning these subjects frequently fall short of awesome. Leo Geter's new play, Naked Before God, however, happily manages to avoid clichés. Although the circumstances of the play are deliberately farcical, the characters are not written condescendingly — they're not a joke. Even more happily, the play is very funny, and the current production by Circle X Theatre Company is smart and eminently enjoyable.

Born again ex-porn star Kristen (Jennifer A. Skinner) has a couple of things to be excited about on the day when the story begins. Her son Duncan (Morgan McClellan) has an audition that morning for his first porn shoot, and she's invited a Christian right-wing radio personality, Barry (William Salyers), to dinner that evening to pitch him on a reality TV show starring herself and her family. Duncan's pregnant wife Carly (Jen Kays) isn't thrilled about either of those situations, and she's immediately suspicious of Nick (Christopher Foley), Duncan's audition partner who's suddenly staying with them for a while. Kristen could deal with all of this, but when her military ex-husband Vinnie (Larry Clarke) returns unexpectedly from Afghanistan with his buddy Octavio (Aly Mawji) in tow, things are about to become unmanageably complicated.

Skinner gives a terrific performance as Kristen, a high-energy comedic dazzler that also works as a sharply drawn character study. As in any proper farce, the central role needs to be serious, so the audience has a stand-in to react to the ascending craziness, and Skinner takes Kristen seriously. As silly as she acts, Kristen has aspirations to save her family, and the play respects that. McClellan is charming as the amiable Duncan, the insecure child not very far behind the façade of suavity Duncan would like to project. Salyers is pitch-perfect as Barry, getting the "radio voice" just right, and the sincerity of his character is a nice revelation.

Kays has fun with the capable Carly, a scene in which she verbally eviscerates Nick is a highlight. Foley impresses as the shifty Nick, and Mawji is delightful as the not entirely guileless Octavio. The play is entertaining before Clarke's arrival onstage, but it gets a huge boost of energy when he appears, kicking the show up into the next gear. As with Skinner, Clarke takes a character that could be a stereotype and imbues it with personality and quirkiness, upending the audience's expectations. He's skilled and hilarious in the role.

As a director, Geter serves his play quite well, getting strong work from a great cast, and his swift pacing keeps things percolating. His writing is amusing and assured, but better than that, it's interesting and surprising. Does the play tell us anything new about religion or pornography? No, but it introduces us to characters in those fields we might not have met before, and that's an accomplishment. Brian Sidney Bembridge's sets evoke the family's low-rent if not uncomfortable milieu effectively, and his lighting effect suggesting the presence of a pool is simple but lovely.

"Naked Before God" plays at [Inside] the Ford through April 28. Tickets are available online.