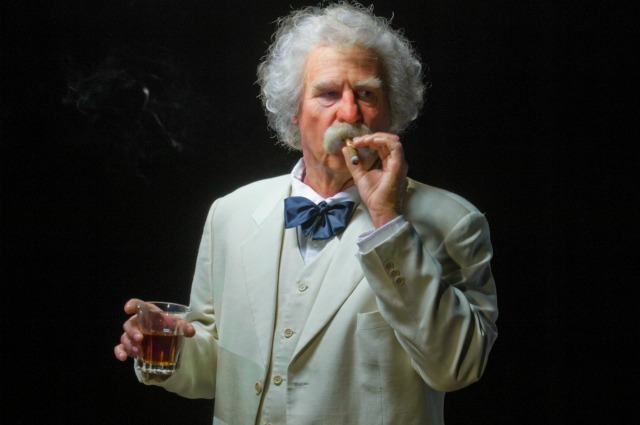 Val Kilmer is known for his roles in Batman Forever, Tombstone, and Oliver Stone's The Doors, but it is his passion for theatre and literature that will resurrect Mark Twain on the stage through seven upcoming theatre workshops at the Masonic Lodge at Hollywood Forever Cemetery. Kilmer will start the workshops with a performance of his one-man show Citizen Twain where he plays Twain himself. Following the performance, workshop attendees can talk to Kilmer during a question-and-answer session. LAist spoke to Kilmer via phone about his upcoming play workshop, his deep appreciation for Twain, and, of course, mustache street cred.

LAist: What can you tell us about Citizen Twain?
Val Kilmer: I hope to make Mark Twain a vital, exciting, contemporary character. He was a real breakthrough artist. In one sense, Citizen Twain it is a biographical sketch, but it is also impressionistic. I want to make Twain relevant. He is dead in my play, which is why it is in Hollywood Forever Cemetery, but he forgets that he is dead from time to time and he gets involved with today's world.

I don't think that anyone thinks of Twain as anything other than a great writer, but he was a very important in creating our American social identity. He made art so entertaining and set his standards for art so high that he changed prejudices and forced an entire nation to accept a higher standard of tolerance. Twain was an outspoken critic and really funny, but has that special spark that comes from intellectual experience. Twain came before Lenny Bruce and Richard Pryor. He started the great tradition of being outspoken! We all assume that racism, and sexism have diminished since Twain's time, but we don't have a real national conversation going about prejudice and abuse. It's weird! How is that possible in the United States? Mark Twain was all about that national conversation. He was empathetic. He loved to talk about how crazy we all are. He tried to live a moral and responsible life. Twain was so insightful, but at the same time, so much fun — like your favorite crazy uncle that let you do things as a kid that your parents wouldn't approve of. I feel really passionate about America and I think Mark Twain's story reflects that passion.

LAist: Citizen Twain is a one-man show. You are at once the writer, director, producer, and the sole performer. What is that experience like?
VK: I really love the theatre and I'm lucky to have such high quality imagery in Citizen Twain. I have always enjoyed writing. My first play, How It All Began, was a play that I wrote at Julliard. It was directed by Joseph Papp at the Public Theatre. That was really gratifying. In Citizen Twain, the framework is all Twain's, but I have come up with jokes and written transitions for that framework. It is enormously gratifying when people laugh at something you made up. And I definitely have a lot more respect for producers now. I would love to give that job away!

Although, I am looking forward as a producer to helping communities that are neglected such as veterans, children in foster care, and working with a charter school. I want to help out. We are charging a little bit more for tickets to this workshop so that we can give tickets away to less advantaged communities and those that are less fortunate. 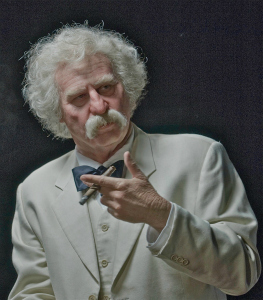 LAist: Why did you choose the title Citizen Twain?
VK: The show has two titles, actually. Citizen Twain and Mark Twain Saves America. I think the term "citizen" was used a lot in his day and has become iconic because of Citizen Kane. I thought it was a funny, take-charge pun and I wanted to give the audience something as bold as Mark Twain Saves America. He is famous for saying "I am not an American, I am the American," which he would immediately back up with hilarious self-depreciating statements. He was a brilliant comedian. He would say he is the greatest, but he also happened to actually be the greatest. During his life, he was the most popular American on Earth. He had an amazing life!

LAist: What inspired you to do this play as a workshop?
VK: The standard, traditional way of doing things with the hope of opening on Broadway is hard to do. You have to work out a deal and then it is really hard to open on Broadway. So I am experimenting with workshops in major cities. I hope to find a humble abode for a Citizen Twain performance in San Francisco or Berkeley. While I am workshopping the play, I am also going to do two charity signing events in Dallas and Chicago and will attend screenings of The Lotus Community Center at the San Francisco and Tribeca Film Festivals.

Citizen Twain is connected to a larger project that you are working on about the life of Mary Baker Eddy. Would you like tell LAist a bit about that?
VK: I would really just like to focus on my play today but I will tell you that I would like to make a movie about Mary Baker Eddy. She was just like Mark Twain — a real radical. And Twain was obsessed with her. I have an ace in the hole as a filmmaker because he was known for his honesty, but was really awful about Eddy in the press and there is a reason that he overtly lied about her. It is controversial and almost embarrassing that nobody in the literary community has taken the time to delve into it. I am looking forward to doing fundraising and public awareness for investors. Any interesting independent film has to be resourceful and I will go regionally looking for investors to self-finance the film. It is tough to do a period film for less than $3 million, but I have a lot of hope for this project.

LAist: Did you learn anything about Mark Twain that surprised you while researching his life for the Citizen Twain role?
VK: I think every day there is a surprise for me because he was so dynamic. When he said "I am not an American, I am the American" he doesn't mean that he is part of the one percent, although he did know all of one percent of his day. He grew up on a dirt floor. He went to work at 12 years old and did back-breaking labor until he became famous for his writing.

I get the sense that the key to his genius is his genuine love for all of humanity. His simple point of view and humor is the breadth of his inspiration. He was a real truth teller. He co-authored The Gilded Age and you can really see the dilemma of America back then very clearly. From the Gold Rush on, we have never stopped our campaign of greed. Everything has to be faster and quicker with easy-to-digest slogans. In reality, nobody else in the world lives like us. Nobody sells the instant point of view like America. But Twain represented compassion through all of this. He was this lowly river rat, but he defined the American dilemma, that we have created a system that has never approached all people fairly. He was the most creative and dynamic American persona up to that point in history. He established the great American novel through Huckleberry Finn. He defined America as articulate within our own American language.

LAist: What is your favorite part of portraying Mark Twain? How do you feel when you resurrect him on the stage?
VK: I am so grateful to be representing him on stage. His level of intelligence and the way he always brought out the positive side of everyday life is great. We should put everything through the Mark Twain filter. I feel really humbled when I play Twain.

LAist: Mark Twain said "Los Angeles is a great place to live, but I wouldn't want to visit there." What do you think he mean by that?
VK: There is another line of his that I use in the play. Twain said "living in California adds ten years to your life, but I think I'll l spend them in NY." I think he was playing up to the conceits of the East Coast. He loved San Francisco. I think he loved everywhere that he traveled. He was just goofing on Los Angeles. I am from here and let me tell you, it is easy to goof on Los Angeles.

Mark Twain had one bad-ass 'stache? How does it stack up against other famous mustaches like Freddie Mercury's or Tom Selleck's?
VK: Mark Twain's 'stache? It is the original!

Citizen Twain is playing as a workshop at the Masonic Lodge at Hollywood Forever Cemetery through April 12th. Tickets are $60 and available online.