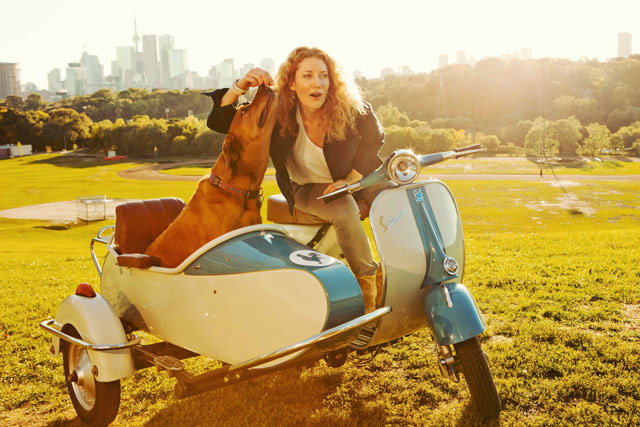 Canadian singer/songwriter and multi-instrumentalist Kathleen Edwards wrote her fourth album, Voyageur, in the wake of an unraveled relationship and recorded it as a new one blossomed. As a result, these 10 songs stick with the listener as they traverse roads both familiar and less traveled.

Voyageur's guests further testify to the strength of Edwards' music. The lineup includes everyone from Norah Jones to co-producer (and Edwards' boyfriend) Justin Vernon of Bon Iver. LAist spoke with Edwards last Friday to get the scoop on the new album, her Siamese cats—Mr. T and Little T—and her full-band show tomorrow night at the El Rey.

It's great that you partly based the name of the album on the "Voyageurs" summer camp group you attended as a young girl. At what point in writing these songs did you make a connection with those childhood memories?
Even though I spent a long time searching for a title for this record, in retrospect, I think it was coming together all along. Right before I started recording in August 2010, Parks Canada—the federally-managed protected park system in Canada—invited me to participate in this massive art project. I went to Wapusk National Park in Northern Manitoba, where the polar bears spend their summer months as they wait for the ice to freeze again.

Sounds amazing! What kind of project were you involved with when you arrived?
It was this cool, off-the-grid music and film project. I just completely reconnected with the feeling I had when I was a kid at summer camp. It was incredible being out in the woods for weeks at a time, and feeling the camaraderie that happens when you spend time with people like that—even with people you only met the day before. It was a really earnest and wonderful thing.

How did you follow up that experience?
The week after that, I was in Seattle working with John Roderick (of The Long Winters) on some songs, and then I was in Wisconsin recording with Justin for the first time. All those experiences just really permeated my entire psyche or something. It was this feeling of, "Holy fuck! I'm 17 again and everything's possible."

Then at the end when I was trying to find a title for the record, I realized that my life is literally this cycle of cities and places and trying to get back home. The idea of Voyageur just popped in my head and I realized it was the perfect word.

There's a great flow throughout Voyageur. Did you spend a lot of time figuring out the song order?
Yeah, I'm sure everyone does. Sequencing is one of those things that keeps—and sometimes wakes—me up at night. The same goes for my set lists on tour. There's a very subtle art to it, and everyone has an opinion about where a certain song should be.

Is "Mint" the most fun new song to play?
It's actually been a thorn in my side, because it takes a toll on my voice! I didn't really notice this when we were recording it, but as much as I love playing the guitar part on it, it's a bitch to sing. But it's fun too. Sometimes I just have to go for it.

Which song do you most look forward to during your live shows?
"A Soft Place to Land" is my favorite right now.

Given that you play multiple instruments, which one do you use most in songwriting?
It's changed over time. I used to rely mostly on my acoustic guitar, then I tried to get into more piano-based writing. And I've found that writing on electric guitar is quite a different vehicle, because the sounds and tones you get change the feel of the song pretty easily.

I wrote "Mint" on electric guitar, and I think there's a reason it has this great pocket, because I found it on the electric. I would never have written that song on the acoustic.

I hear you. When I played the violin, it was hard to keep a normal expression on my face, much less juggle other elements… It's impressive that you can switch between instruments within the same song.
It's been a challenge, but a rewarding one. I wanted to dig in a little deeper in doing certain things and showcasing a little more of what I can do.

But I actually have the same thing where I can only make one face when I play violin. I guess a certain part of my brain is really working hard. I'm incapable of making any other face except the "I'm playing violin" face. But at least it's not bass face. Bass face is the worst. (laughs)

Did you get to experiment much in the studio? I know Justin brought in some interesting instruments, and songs like "Sidecar" have some sonic surprises.
Yeah, that was one of the things that made this record so rewarding. I wanted to try new stuff and get my hands dirty. Though having said that, the people who played on the record are absolutely responsible for great parts and arrangements and how certain sounds came together.

I sat at home and tried out different synth parts and ideas, and of course bandmates such as Jim Bryson and Justin contributed hugely to finding those little nooks and crannies.

What's one of your favorite experimental moments on the album?
One of the people who played on the record is Phil Cook, a childhood friend of Justin's who plays in a band called Megafaun. Phil did this thing where he started stacking piano parts. On "A Soft Place to Land" and a few others, he'd do a run of piano, then do another one and another one. It turned into this incredible, almost Philip Glass-like orchestra sound. It really changed the tone of three or four songs.

It was great to see that Hawksley Workman played on the album as well…
Yeah, I was a fan of his from years ago and I learned that he was a drummer long before he was known as a producer and songwriter. So I asked him to come in and join us for the album. He's amazing.

It seems that the music community in Canada is really tight-knit.
Yeah, it is. I definitely feel a huge kinship with the community here. It feels like there's a lack of competitive nature between people. People who don't even know each other will send support through Twitter when someone releases a new album or is going out on tour.

The music video for "Change the Sheets" is gorgeous—especially with the time-lapse sequences. Did that cover a long time period on tour?
I made it during the course of a couple weeks as I was opening for Bon Iver in the United States—from Minneapolis to Austin. This filmmaker/director named Dan Huiting joined us. As the other guys flew back to Canada, Dan and I drove back to Minneapolis over four days and stopped to film along the way.

On our way down at the beginning of the tour, we passed through this area with a lot of wind farms, and I said, "How cool would it be to get as close as we could to these on our way back?" We later found out that you can go right up to those turbines. So we filmed among them and I ran through the alleyways between them. It was so fun.

You're known for your wordplay and it sounds like you're an avid reader. Which book are you reading now?
I just finished a popular book that everyone's been reading over the last five years. I'd read The Girl With the Dragon Tattoo a couple years ago, and it was so intense that it actually gave me my first anxiety attack. I was on tour in Europe this past month and we had a stop in Scandinavia, and I decided I was finally ready to read the next one, so I just finished The Girl Who Played With Fire.

But there's this other author I love who's Norwegian, named Per Petterson, and he wrote this beautiful book called Out Stealing Horses. I just started his follow-up book to that.

You mentioned Twitter earlier, and I just have to say your Twitter handle (@kittythefool) is one of the best usernames ever.
Thanks!

Based on the thank-you list in your album, is it safe to assume you have cats named Mr. T and Little T? What kind of cats are they?
Yes, they're Siamese mix. When my first record came out in 2003, there were two cats I'd had since they were kittens, and my parents ended up watching them as I traveled. We thought it would be a temporary cat-sitting situation, but it turned into 10 years.

I missed having cats and had wanted one for a long time. One day as I was on tour, filling up at a Burlington, Washington, gas station, I noticed a pet-grooming place in the strip mall next door. A sign in the window said they had a cat available for adoption. When I saw him, I said, "That's him! That's my cat!"

So I finished the tour and came back to get him. That was Mr. T. He exhibited some signs of being friendly with other cats, so I wanted to get him a buddy. I found another Siamese rescue cat in Toronto, but his name would not reveal itself. So he ended up becoming Little T because he's a smaller version of Mr. T.

Have they ever joined you on tour?
No, they would totally pee in my bunk on the tour bus, and they'd hate it. I miss them a lot when I'm away, but I have an awesome housemate who gives them lots of love. They have a pretty good life.

What's been one of your favorite places to visit on tour?
I love Scandinavia a lot. I think it's one of the most progressive, culturally stimulating, beautifully urban—but also very natural—places in the world. Truth is, Canada and Scandinavia are not dissimilar climate-wise, so I guess that's a part of it too. I also really love the Pacific Northwest and the Midwest. St. Paul is one of my favorite cities in the world.

In spite of the "empty threat" ["I'm moving to America/It's an empty threat"] in the first track on Voyageur, have you moved to the United States?
It's still a threat. I live in Toronto, but I do spend a lot of my free time in the United States. I'm still trying to figure out if I'm willing to contradict myself!

Are there any places you love to visit in Los Angeles when you're in town on tour?
Yeah, there are a couple places I love. I'm a little embarrassed to say I haven't spent enough time in L.A. to feel like I know it well. One of my first really cool shows was at the Silverlake Lounge. And Molly Malones is always fun.

Plus I have to say, shamelessly—and it'll probably sound like such a fuckin' West Hollywood scene thing—but getting up in the morning, walking to Urth Caffé, and having a bowl of oatmeal and fresh fruit and a really good cup of coffee is the best-case scenario when I'm on tour. I'm a sucker for that place.

Would you mind giving us a preview of the El Rey show?
I'll be there with my full band. There'll be some you-could-hear-a-pin-drop quiet moments in the set, and there will be super-loud rock 'n' roll moments. I feel really lucky to have such an incredible band, and those guys play like they've been playing together for 30 years. It's always a joy to get up on stage with them.