The Day of the Year at Mammoth Mountain 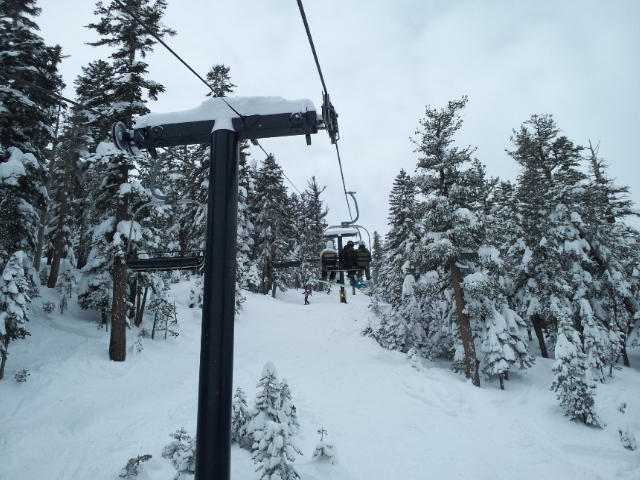 By Esther Tseng/Special to LAist

My friends and I had our epiphany at breakfast at Cinnamon Bear Inn in Mammoth Lakes. While our Weekend Warrior compatriots had returned to L.A. the day before, my friends and I had chosen wisely to take March 19, a Monday, off. The Inn owner placed our omelette plates in front of the four of us that morning, greeting us with, "Welcome to The Day of the Year!"

A forecast print-out came in lieu of a menu, and it laid out the entree du jour: Sunny, 32°F.

It had been a frustrating season for those of us spoiled by the record 2010-2011 season of last year's 661 inches, a figure almost double Mammoth's average yearly snowfall. Only now in late March is Mammoth Mountain almost matching that average thanks to this last storm. Don't call me as ungrateful, though. When you get 42" in 48 hours, it's not the time to complain. Sunday was nothing short of epic and was the last day of the storm we all had been waiting for.

My friends and I traded chair-knocking winds on the lift for knee- and even waist-deep snow stashes. But as we kept cover in the trees by Chair 8 to shield us from up to 95 MPH gusts (as if dealing with the 16°F temperature weren't bad enough), we got access to some of the most exciting video game-like riding on the mountain.* (Trees, while protective, require maneuvering and ability.) 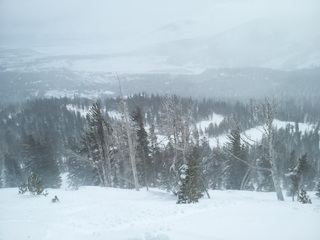 We found plenty of fresh tracks through several runs over Lincoln Mountain via Chair 22 and towards Chair 25, laying some lines under the latter before the chair even started running. The falling, getting stuck, digging yourself out and repeating 'til breathless are all part of the game. We could recondition our powder legs, as the chance had been a rarity for the mostly groomer year. And now, we could lean back and put our tips up! (We just weren't prepared to brave the even crazier winds to the right of Canyon Lodge.)

While the storm brought the winds through Sunday, Bluebird Monday was gravy. With storm winds preventing the upper half of Mammoth from opening during the money-maker weekend, we were lucky to have vacation/sick/PTO days the morning after to contend with the locals. With fresh track comes great privilege. Day of the Year, indeed.

If I once thought waiting for a yellow flag (indicating a chair will be open within 30 minutes) to turn over is too much time to waste, that notion was discarded this past weekend as I shared a chair with a man who waited in the gondola line 1 hour 30 to earn the 2nd run down Paranoid Flats. Luckily, we experienced how epic that run was for ourselves. The only way to take it is to charge it, lest you sink and get stuck. In fact, the powder demands it—there exist no more forgiving conditions to fall into than that sweet sluff.

Prepping for my first run off Scotty's: 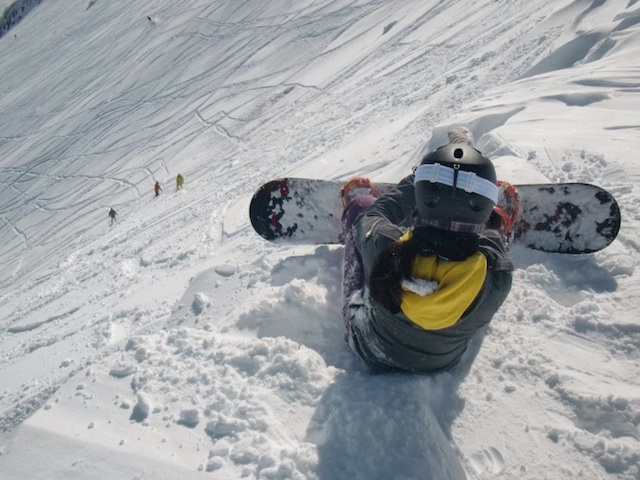 Photo used with the permission of Katie Powell

One of the other top runs of my Day of the Year was the aftermath of that yellow flag, the result of about the 20th-to-load seat on Chair 23. At 3 people to a chair, it's hard to not feel like your fresh line opportunities aren't vanishing with each loading trio. But once I was up there, there really was nothing detracting from the euphoria of this vantage point. That is, the pursuit of untouched snow.

At the top of the Hemlock Ridge: 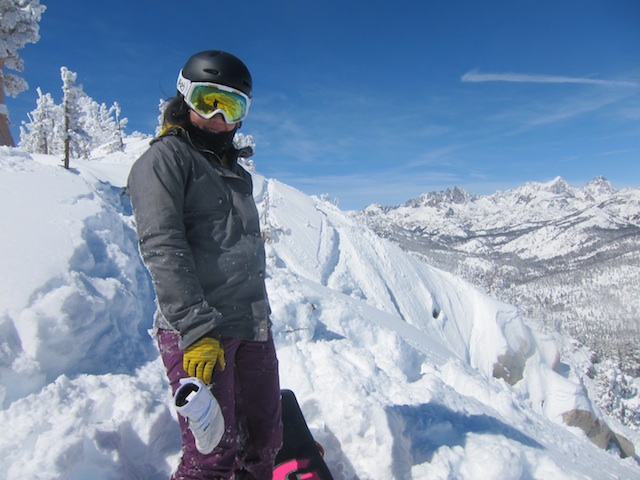 Top of the Hemlock Ridge. All of the backside leads to Outpost Cafe, Chairs 13 & 14: 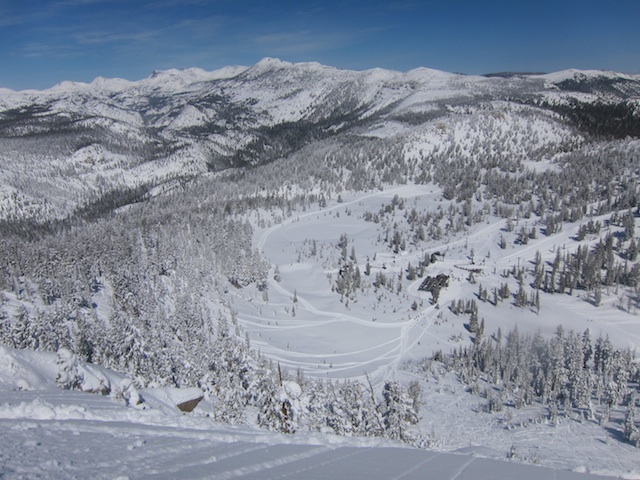 Storms are hard work while the following Bluebird day offers a multitude of opportunities. But the hike up the Hemlocks on the backside of Mammoth Mountain, while with the sun shining, is not a down payment to be taken lightly. The pitch and powder are the payoffs of that single lane hike, and if your fitness and snow skill level is up to it, comes highly recommended. Just know that hikes actually bookend the run, as you'll need some extra oomph to make it to Outpost Cafe, Chair 13 and 14.

That day, March 19th, 2012, was Day of the Year...so far, anyway. As with everything dependent on the elements, nothing is definite, and conditions will always surprise us. A Bluebird day is and always will be a gift, and will never fail to leave us wanting more. Until then, we'll always have the Storm of the Year at Mammoth.

*Stay away from trees, tree wells and loose snow pockets wherever you are on the mountain. Always ski or ride with someone. Never ski or ride alone!