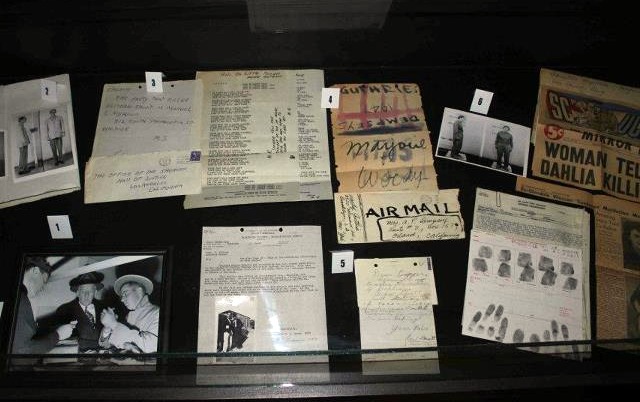 by Adrienne Dorsey / Special to LAist

More than 65 years after her mysterious murder in Los Angeles, “Black Dahlia” Elizabeth Short’s unsolved case is now part of the Elizabeth exhibit at the Los Angeles Police Museum.

The mutilation slaying of 22-year-old Short, nicknamed "Black Dahlia" by reporters, has captivated the public since her bisected body was found on a vacant lot in Leimert Park on January 15, 1947. The exhibit is sponsored by bestselling crime fiction author James Ellroy, who penned The Black Dahlia in 1987.

The exhibition runs now through June 16. Located in Highland Park, the Los Angeles Police Museum is open Monday through Friday, 10 am to 4 pm, and every third Saturday of the month, 9 am to 3 pm. Adult admission is $8.