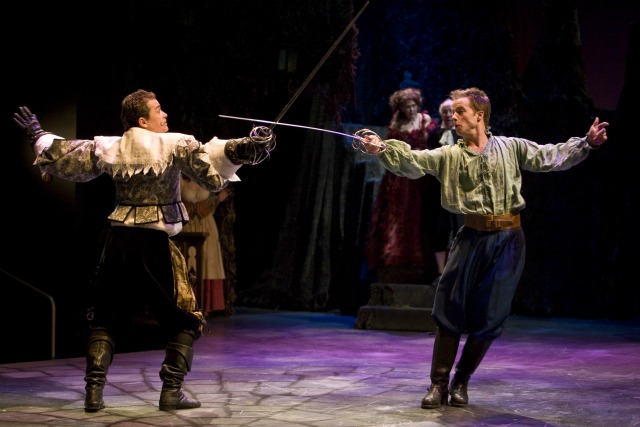 Freddy Douglas and Graham Hamilton in 'The Illusion' (photo by Craig Schwartz).

The Illusion, Tony Kushner's cheekily-updated adaptation of Pierre Corneille's L'Illusion comique, is playing at A Noise Within. This reflective and funny meta play depicts a father and his unconventional last-ditch effort to find his estranged son. Kushner's introspective and witty script weaves a fairy-tale like narrative out of irony and physical comedy. Under the direction of Casey Stangl, The Illusion is visually enchanting, peppered with fine performers, and had an excellent surprise ending. While the philosophical undertones of The Illusion are geared toward a sophisticated adult audience, the charming staging of this production has tons of kid-friendly appeal and is perfectly suited for budding theatre patrons.

The ensemble cast of The Illusion is engaging and lively. Graham Hamilton is thoroughly entertaining as he plays three interconnected but principally different characters. As Calisto, Hamilton brightens the stage with top-notch, high-energy physical comedy; as Theogenes, he is dark and commanding; as Clindor, his jocular inflections give way to beautifully course passion. Deborah Strang's mesmerizing portrayal of Alcandre, a complex witch equally capable of being vile and compassionate, is full of graceful exuberance and poetic gestures. Devon Sorvari and Abby Craden work in tandem to deliver parallel streams of female prototypes through their numerous roles. Sorvari is understated and polished, but at times a bit restrained. Craden brings spunk and backbone to her characters. Her enthusiasm is contagious as she relishes her time on stage. Lastly, Allan Blumenfeld, an easy audience favorite, memorably draws constant streams of deep belly laughter from the audience through his plush and delightful portrayal of Matamore.

Deborah Strang and Jeff Doba in 'The Illusion' (photo by Craig Schwartz).

Under the find-tuned direction of Stangl, The Illusion is a charming two-act adventure that is inviting, full of movement, and lots of fun. A Noise Within's staging standards are typically high and do not disappoint: Julie Keen's costume design is striking, particularly her dramatic take on Alcandre. Scenic design by Keith Mitchell and lighting by Jeremy Pivnick foster a magical, thoughtful atmosphere that is perfectly suited for a Kushner-ized classic.

The Illusion is playing at a Noise Within through May 19. Tickets are $42 to $46 and available online or via phone at (626) 356-3100. The theatre advises that The Illusion is well-suited for patrons age 12 and up, but also for younger children that have already learned proper theatrical audience etiquette with the ability to sit for periods of an hour or more.