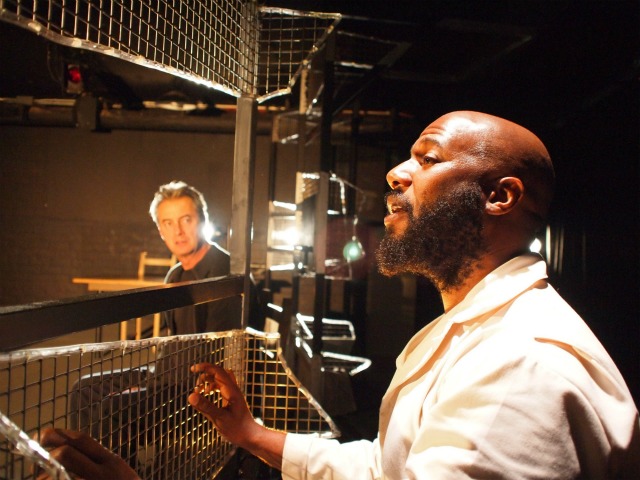 The talented cast is a pleasure to watch as they run through a wide and unexpected emotional spectrum. John Nielsen leads as Dr. Morri, a jaded prison psychologist. Nielsen is poised, graceful, and commanding on stage — distinguished almost in spite of his character's initial apathy. Jemal McNeil portrays the opposing multiple personalities of Gary Henderson, employing personas that are so wildly different that he truly seems like two different people. McNeil has an impressive range, often transitioning from a very tough and staunch depiction of a callous thug to a gentle and sensitive mess of childlike confusion within a single breath. Matt Kirkwood is assured and full of machismo as the slightly cliche but realistic Officer Caine. Kirkwood periodically injects his character with strategically placed and subtle doubtfulness that give Caine some depth. 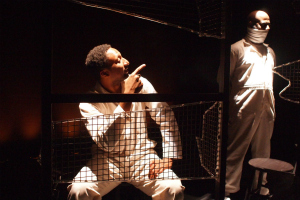 Wiley B. Oscar and Jamal McNeil in 'Cages' (photo by Lorely Trinidad).

The spitfire supporting cast may be on the stage just a bit less, but they bring tremendous energy to the play. The characters surely represent a composite of the many individuals encountered by the playwright in his work as a social worker, but their complexity makes evident that they are indeed realistic and not simply born out of imagination. We loved seeing Steve Apostolina's portrayal of the homicidal and deeply disturbed Gordon. The character is of course intentionally scripted to be vile, but Apostolina brings an absolutely frightening, quirky, and dark humored edge to the role that is pitch-perfect and easy to relish. William Stanford Davis (Fargo), Wiley B. Oscar (Brandon), and Daniel Graulau (Fuentes) bring warmth, empathy, and cautious complexity to their roles as they rapidly bounce dialog off one another, creating a tragicomic cacophony that draws out audience sympathy. Davis, Oscar, and Graulau treat their roles with an irresistible gentle irony. Lastly, Arlene Santana, plays sell-out psychologist Sally Stein. The role is annoyingly cheery and optimistic during the first act, but Santana is significantly more believable and knowingly subversive after Stein transitions into the less-than-ideal corrupted administrator in Act Two.

John Lawrence Rivera's direction ofCages is artful, fluid, and attentive. Rivera's broad use of the stage really pops aesthetically amid the somber and murky tonality of the set. Robert Selander's scenic design is edgy, creative, and interesting. Costuming by Mynette Nora is realistically effective. Finally, lighting design by Adam Blumenthal is excellent, wonderfully atmospheric, and honors the stage as a lucid palate.