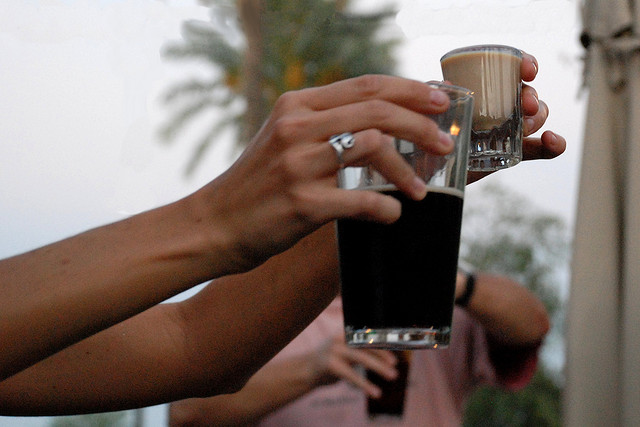 By Marcus Beer / Special to LAist

Saint Patrick's Day is upon us once again, a time for everyone in the world to claim some sort of Irish heritage and drink themselves silly while partying. There is nothing wrong with that, we all need to blow off steam, more so than ever nowadays, but there is one part of Saint Patrick's Day celebrations here in the US that fill me with anger and disgust: The drink (and now the cupcake) named "The Irish Car Bomb."

In Los Angeles, you can get an Irish Car Bomb donut at the Nickel Diner, and the drink as part of St. Patrick's Day specials at places like 25 Degrees, Public School 612, and The Churchill among many others; any bar year-round can easily drop a shot glass of Jameson and Bailey's into a pint of Guinness.

As someone who grew up in the UK during the 70's 80's and 90's, the phrase 'Irish Car Bomb' did not mean a drink or a cupcake; it meant terror, death and destruction. Where I lived in Wales, 'The Troubles' were just across that short strip of water called The Irish Sea. When violence came to the mainland, it normally came to our other neighbor England, leaving us sandwiched in the middle.

Every night growing up, the news reports would lead with horror stories from Northern Ireland of bars being riddled with bullets or car bombs blowing up in crowded market places, killing or maiming dozens of people at a time. The IRA was our Al Qaeda.

In my school there was a kid named Robert. He was well liked, a year younger than me and an excellent rugby player. I had the pleasure of turning out with him for our local youth team several times and he was a good kid. When Robert left school, he enlisted in the Army. He was in basic training when he got the chance to go home and surprise his mum for her anniversary. Robert was standing at a railway station in England waiting for his train home when an IRA agent shot him in cold blood.

If you go to the UK now, you wont find many trash cans around in public areas. This is because in the 80's and 90's, the IRA decided to start planting bombs in them, detonating them during busy periods to cause maximum carnage. I was living in London in the 90's and would often get a call from my mum telling me that there was another bomb scare in central London and I was right in the middle of it.

I know that in the US, the IRA were portrayed as heroes while the British forces were monsters. The propaganda machine was well oiled and made sure that so much of the cash used to purchase parts for the car bombs came from these shores.

And if you think this is a thing of the past, a car bomb went off in Cork, Ireland on Monday.

And this happened last year. And this the year before.

So America, I am asking you one question. How would you feel if some former enemy of the US decided to market a "Flaming Twin Towers" cocktail? I know I would be furious, and I am not even American. A terrorist attack on one is an attack on us all.

Insulting the memories of those killed on both sides by creating, selling or ordering a cocktail (or anything) called "Irish Car Bomb" is not something Americans or anyone should be doing, let alone celebrating. Try heading to Ireland and ordering an "Irish Car Bomb" and see what type of response you get.

Marcus Beer is a Welshman who has called L.A. his home for 11 years. He mostly talks about video games for NBC Los Angeles & Gametrailers.com. You can follow his rants on Twitter @annoyedgamer