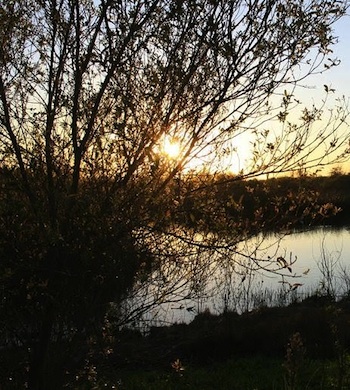 It may seem hard to believe that there’s any kind of nature to be seen near LAX, but just a few miles up Lincoln Boulevard from the airport, that’s exactly what you’ll find.

Ballona Creek runs west into the ocean, starting almost ten miles inland. Near the mouth of the creek, it widens and forms both freshwater and saltwater marshes. Runoff from the nearby Baldwin Hills fills the basin. Spring is a particularly attractive time to visit the wetlands, although it’s a nice place to take a break during any season. Wildlife here includes ducks, egrets, geese, hawks and more.

Several of the trails are accessible only by guided tours (visit Ballona Friends' website for more information) but a public trail, open from dawn until dusk, runs around the perimeter of the marsh, paralleling Jefferson and Lincoln. While the trail doesn’t allow many close-up views of the marsh, it is a pleasant walk, especially at sunset, and it may well inspire visitors to get out and explore more natural areas around Los Angeles. There is also a trail (currently being renovated) on the east side of Lincoln, accessible from Playa Vista Park, and a Discovery Park slated to open later in 2012.

The main trail is approximately a mile long. Interpretive plaques provide information about the habitat; benches allow visitors to rest and enjoy the scenery. On the section of the trail paralleling Jefferson, you can see the Santa Monica Mountains and even a few glimpses of the San Gabriels on clear days. The trail then turns right and follows Lincoln. This portion is a little quieter; the trail is set back a few feet from the street. You can see the marshes well during this stretch. Eventually the trail splits, with the left fork joining Lincoln and the right fork dead-ending at a fence. This is all you can do on your own, but with a guided tour, you can explore more of these wetlands.

Parking is free, and available on the south side of Jefferson, west of Lincoln. From I-405, take the 90 Freeway west to Culver Blvd. Turn left (southwest) on Culver, and go 1.2 miles to the intersection with Jefferson. Take a hairpin left on Jefferson and park along the side of the street.

Like other coastal wetlands in the area, the Ballona Creek marshes are a unique glimpse into Southern California’s past. They are a nice place to come for a walk, to observe wildlife or to have some quiet time. It’s easy to pass them by, but if you decide to stop and visit, you’ll be glad you did. As you look out at the homes perched on the bluffs on the south side of the marsh, you’ll be thankful that this little pocket of open space has been preserved.