"The Seagull" at The Antaeus Company Never Takes Flight 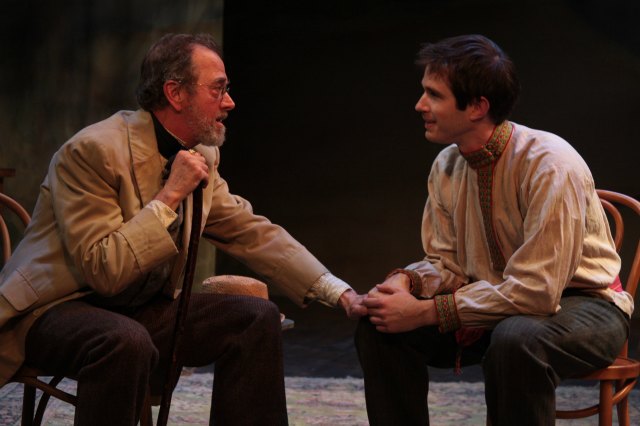 Anton Chekhov famously contended that his plays were meant to be comedies, albeit perhaps with a tinge of melancholy in their makeup. Regardless of this authorial intent, productions of his work over the last century have tended toward the languorous and dour. The Antaeus Company, one of the finest and most knowledgeable theatre troupes in town, has unfortunately taken this path with their new presentation of The Seagull. Antaeus always double-casts its shows, so my review is of the “Samovars” cast only.

The setting is a countryside house in late 19th century Russia, and famous actress Irina (Laura Wernette) has returned home with her current lover, the noted writer Trigorin (Adrian LaTourelle). Her twenty-something son Konstantin (Joe Delafield) is desperate to show his mother that he is also an artist, and he’s putting on a play he’s written, starring the girl he’s smitten with, wannabe actress Nina (Jules Willcox). Irina’s older brother Pyotr (Gregory Itzin) has retired to the countryside, but hopes she’ll take him back to the city with her. Masha (Avery Clyde), the daughter of the estate manager, loves Konstantin from afar. Love and happiness could triumph within this group, but they do not.

Wernette (filling in for Gigi Bermingham, who was out sick the night of the performance reviewed) plays the comedy in her role, but she doesn’t convince concerning Irina’s larger-than-life star qualities. LaTourelle seems simply miscast as Trigorin, delivering mild intellectual discomfiture instead of the allure that causes women to fight over the character. Delafield plays Konstantin completely straight, not acknowledging that Chekhov may have meant this character to represent self-serious young artistes that lack talent if not ego, and the result is a tragedy that doesn’t feel all that tragic.

Willcox is professional if a bit bland as Nina, not putting her stamp very deeply into the role. Itzin, known for playing a panoply of brash and self-confident characters, tries something different with Pyotr, making him internalized and tentative. It’s a subtle and interesting performance, but almost a bit too subdued. Clyde is a bright spot in the cast, sharp and funny as the bitter Masha, and John Achorn is similarly strong as her garrulous father. James Sutorius is slyly amusing as the doctor Dorn, and Patrick Wenk-Wolff is good as the kind but hapless Medvedenko.

Director Andrew J. Traister focuses on the dramatic aspects of the play to the extent that there were very few laughs to be had in the bulk of the show. Compounding this problem is his decision to keep the performances consistently low-energy, so what should be a mix of different characters and different levels of enthusiasm—some flamboyant, some more restrained—emerges as something muted and dry.

"The Seagull" plays at Deaf West Theatre through April 15. Tickets are available online.