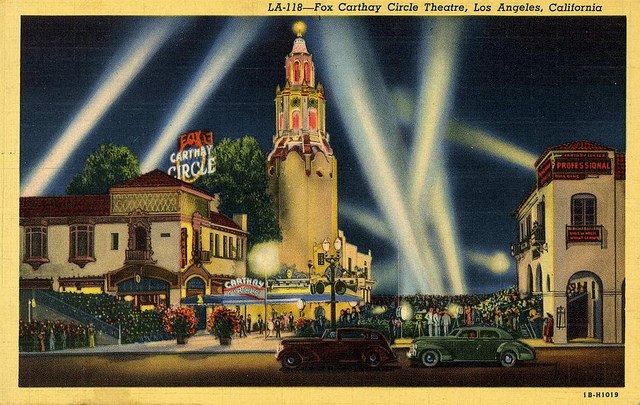 The historic Carthay Circle Theatre, once a crowning spire on the landscape of the Mid-Wilshire area, will rise again, but in an entirely different locale. Disney California Adventure Park will be home to a version of the iconic old-school movie palace, where Disney's 1937 animated classic "Snow White and the Seven Dwarfs" had its premiere once upon a time.

Alas, the Disney version is only to be a replica, and will not hold an actual theatre inside. However, the mock Carthay Circle Theatre "will include a lounge and restaurant intended to be the premiere dining location in Disney California Adventure," notes City News Service.

The facades and shops of DCA's version of neighboring Disneyland's Main Street USA stands as tribute to the Hollywood and Los Angeles of yesteryear that Walt Disney knew. Plans for the replica were announced in September 2011.

"After walking through the park’s new Pan-Pacific Auditorium-inspired turnstiles, underneath the Hyperion Bridge, and down the newly-redecorated street, guests will find themselves in front of Disney’s recreation of the Carthay Circle Theatre," explains Inside the Magic, adding that the restaurant inside the replica theatre has been "developed by the chef of the award-winning Napa Rose restaurant at Disney’s nearby Grand Californian Hotel."

The Carthay Circle replica is on the new Buena Vista Street at DCA, which will also nod to old L.A. with replica Red Car trolleys. It's part of a five-year expansion project at the theme park that includes the opening of "Cars Land."

Here's a bit about the real Carthay Circle Theatre, from our LAistory series:

A first run, road-show house, Carthay Circle was built in 1926, in the Spanish Baroque style. Designed by A. Dwight Gibbs, its fifteen hundred seats arranged in a circle with space only for the screen. It was built to amaze, with its grand tower, fine tile work and crystal chandeliers. At night, it featured an enormous neon sign and the gorgeous arches of the building itself were lit with floodlights until it looked like something out of a fairy tale. Even the ceiling was a beautiful blue, black and gold circle with a many-spoked star in the center.

Sadly, besides in old picture books and online, the only chance to see the Carthay Circle Theatre in person is going to be at the re-done entrance to DCA, since the real theatre was demolished in 1969.

The new Carthay Circle Theatre replica, as well as "Cars Land" and all of Buena Vista Street, will open to the public June 15.