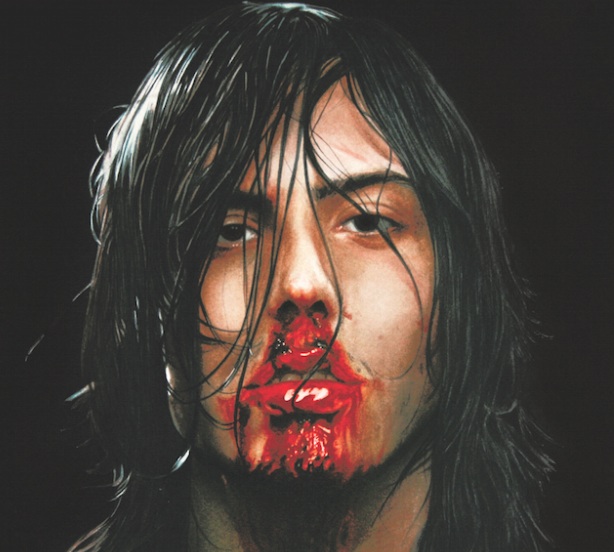 By Zach Bourque / Special to LAist

Naturally I am referring to Andrew W.K., the front man turned game show host turned motivational speaker who has over the course of the past decade provided the soundtrack for your angst ridden party days.

With the introduction of the celebratory anthem “Party Hard” back in 2002 W.K. certainly made a splash. The song was brash, unapologetic and oddly addictive in a way that our generation hadn’t experienced. In regards to the trademark chorus Andrew notes that “the goal was to use this word PARTY with the understanding that every human being has the right to find pleasure in celebrating being alive.”

The album artwork for his debut release “I Get Wet” featured the striking image of a broken-nosed W.K. bleeding bright red down his trademark white shirt. Eye catching, yes but the image has provided more than simply album sales for W.K., who says “there was a lot of debate about it at the record label my manager and handlers but we all eventually saw the power and the quality of it. It's my logo at this point.”

If the music has made his brand, W.K.’s live shows have made his name. Wild, energetic and filled with passionate shenanigans, the Andrew W.K. live act is really something. “At my first show ever in London I had to go to the hospital because I hit my head during the show really hard and had a seizure," he explains. "I couldn’t believe we had to do it tomorrow night and the next night. It was the most intense thing I’d ever done in my life.”

While 10 years has provided him plenty of time to land big boy jobs like motivational speaking gigs at Harvard and Yale, W.K. is quick to note that he hasn’t grown up that much: “I’m better in every way. I’m stronger better and the band and I have never been more ready. We’re capable of delivering the best shows of our careers.”

Marking the 10-year reunion of “I Get Wet,” as well as the resolution of years of damning legal troubles, W.K. will be performing his debut album in its entirety on a world tour. Back with his full band, the excitement of the event is hard to ignore.

“It’s all very mind blowing for me and I feel more grateful than ever just to be here let alone be here for this long. This is a chance to come and see everyone that hadn’t seen us in a long time and the people that have never seen us. “

Tickets are still available for the show via Ticketmaster, which will take place March 8th at the Avalon in Hollywood and promises to be a sweaty, triumphant reunion you won’t soon forget.