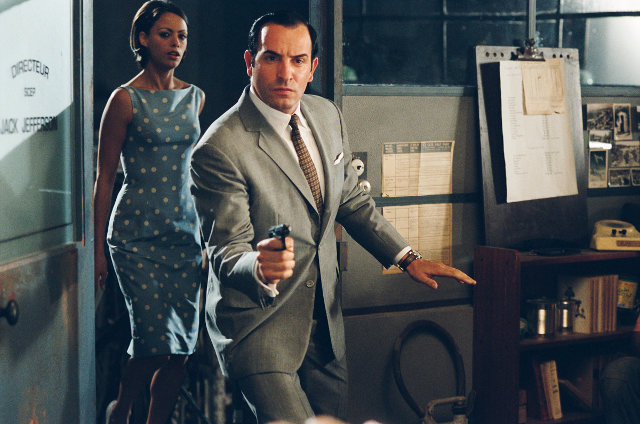 When Natalie Portman introduced Jean Dujardin at Sunday's Academy Awards, she said The Artist was his introduction to America. This is only true of audiences who missed the Oscar winner's wonderful OSS 117 films released a few years back. If you don't recognize the call letters, OSS 117 (played by Dujardin) is the French 007, only thicker-headed. Like The Artist, these films share an exquisite attention to period detail. Besides serving as a love letter to 60s spy capers, they offer a wry satire of European colonialism and perceived superiority. A dashing lead isn't the only Oscar name the OSS 117 films and The Artist share: there's a winning director (Michel Hazanavicius) and composer (Ludovic Bource), as well as nominated cinematographer (Guillaume Schiffman) and supporting actress (Bérénice Bejo). Both OSS 117 films, Cairo Nest of Spies (set amid a "bazaar" Middle Eastern plot) and Lost in Rio (a send-up of Nazi refugees and tropicalia) screen this weekend at the New Beverly.

The Oscar and commercial success of Martin Scorsese's Hugo prove there's a renewed interest in preserving film history. The Cinefamily has the real deal all week long - a restored print of the silent version of Charlie Chaplin's The Gold Rush (featuring The Tramp's endearing "dancing dinner rolls" scene, among many others). Decades before director's cuts enabled creative "fixes", and well before the George Lucases and James Camerons of the world would convert existing releases to play in new formats, Chaplin recut, redubbed, retimed and rescored his 1925 comedy The Gold Rush as a talkie in 1942. This version saw great success (including nominations for music and sound at the 1943 Oscars), but the original was quietly withdrawn from circulation to languish in public-domain hell. The Criterion Collection (known for their definitive DVD/Blu-Ray releases of the classics) spent over 500 hours restoring the film for this 35mm re-release. Be among the first to see it at the Silent Movie Theatre's exclusive engagement.

It's a very different Silent House at the Aero. Elizabeth Olsen (Martha Marcy May Marlene) stars in the haunted house chiller. Like the Uruguayan film it was remade from, the film is presented in real time as a single take. The film will be released wide next weekend, but Saturday's program is a special preview, featuring married directing team Chris Kentis and Laura Lau for a Q&A. Then, it's more terror in tight spaces, with Kentis and Lau's previous feature Open Water. Tracking two divers left adrift in shark-infested waters, the film's all-digital, home video style preceded the wave of full-on found footage films that mark of today's low-budget horror.