Beyond the Jar: Meet Preserver Jessica Koslow of SQIRL 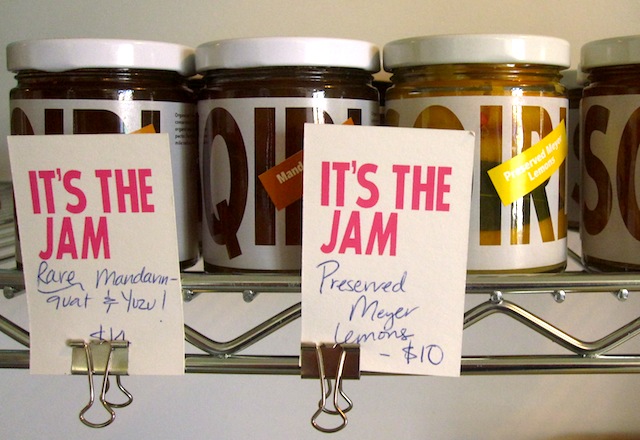 There’s a large map of California hanging towards the rear of the modest Silver Lake kitchen and storefront of SQIRL, a small-batch artisanal preserves company owned and operated by Jessica Koslow. The map has small colored dots matching corresponding names down the right column, indicating all the farms and orchards where her produce comes from. The aroma of fresh citrus wafts through from the open kitchen; on the stove today are blood oranges, sliced thinly, their flesh becoming a shimmering liquid of an almost-cartoonlike orange. Koslow can tell you in a heartbeat where those oranges came from, though it will also end up on the jar of preserves this bubbling copper pot’s contents will soon become.

SQIRL launched in the Silver Lake space just about a year ago, and, thanks in no small part to Koslow’s food and business philosophy and vision, has already made big waves in the local food community. She only sources from within a 200-mile radius of the shop. And who grows the food matters: “I like to work with produce from farmers who give a damn about what they’re planting,” she explains. 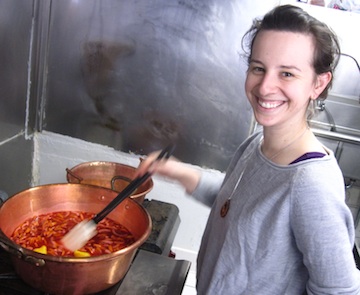 Jessica Koslow at the stove at SQIRL (Lindsay William-Ross/LAist)
Koslow first became introduced to the craft of preserving fresh produce as a pastry chef at Bacchanalia in Atlanta, Georgia, where she says they produced a lot of preserves used in their baked goods. Inspired by working with chefs who “championed using produce sourced from the most local farms possible,” Koslow arrived in Los Angeles, after a brief sojourn in New York, and found herself “blown away by all the produce at the market.”

The almost-overwhelming abundance of varieties of fresh produce in L.A. proved to be prime inspiration for Koslow, who says she found the options brought her back to what she’d been doing in Atlanta, with the key realization that now she could take on preserving on a whole new scale and without as many limitations on seasonality. “I just realized I wanted to take that kind of craft and fuel it into something,” she continues.

That something turned out to be SQIRL, which, Koslow explains, is a play on the notion that she is a girl who takes part in the old fashioned “squirreling away” of fresh food to be used later. While the letters SQIRL adorn her custom glass jars filled with toast-friendly concoctions like Nagami Kumquat & Chamomile, Kaffir Lime Leaf & Meyer Lemon on her nearby stock shelves, the craft that fuels Koslow’s passion isn’t limited to sweet jams and marmalades. “I’m interested in what preservation means as a craft,” says Koslow, naming a few of the techniques and applications under the umbrella of the process, like pickling and charcuterie, both of which she has done and will continue to do.

To help her further explore the craft, and the reach, of preservation, Koslow spent some volunteer time training with Chef Ernie Miller at the Farmer's Kitchen at the Hollywood Farmers' Market, and she recently became a Master Food Preserver, through the University of California Cooperative Extension MFP program. The scope of the program allows the selected participants to learn in a structured environment the USDA regulations and specific methods for accurate canning for home use. Additionally, the program mandates that Master Food Preservers take their knowledge back into low-income communities to pass on their skills; to that end, Koslow says she is looking forward to working with local 4-H groups to teach them about preserving.

While something like a 4-H club might strike some urbanites as old-timey, Koslow and SQIRL are far from that. In fact, Koslow makes widespread, but restrained, use of popular social media tools like Twitter, Facebook, Tumblr, and Instagram, to connect her business and craft with customers. A new pot, a tree laden with ripe fruit fresh for picking, or the bubbling batch of the moment tell the visual story of SQIRL, an image at a time, letting food lovers and consumers experience her product beyond the jar. 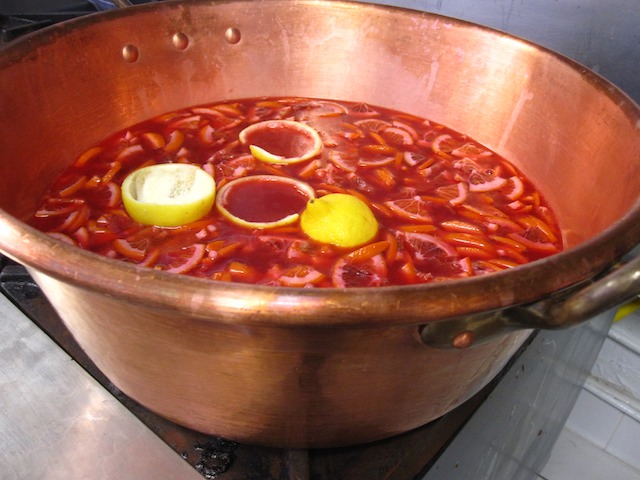 “Beyond the jar,” is really the core of how Koslow operates, and this becomes more evident as we sit and chat about the current trend surrounding preserving, canning, and artisanal food. You know, the whole Alice Waters thing. “People really want to know where their food is coming from,” says Koslow, when asked what she thinks is inspiring this current food trend. She points to the emotional appeal of the Chipotle ad starring cartoon piggies and the voice of Willie Nelson that aired during the Grammys as example.

History, too, plays a role in what many are doing now when it comes to making their food dollar stretch, and the penchant for taking on DIY projects like home canning. But that challenge isn’t limited to just the home-preserver—businesses have also had to face the current economy with sharpened skills on how to spend less and still give their customers a delicious product. To that end, Koslow points to savvy chefs and restaurants who are able to offer their clientele things like pickles, that showcase best practices of giving fruits and vegetables a vibrant second life after their season has ended.

Koslow compares the “trends” in food to trends in fashion, like how quickly wearing a certain color can go from the thing to do to being totally gauche. If “artisanal jams,” are a quote-unquote trend, though, Koslow says she prefers to not think of what she does in those terms.

“It’s something we as Americans enjoy—we like toast with jam. [Preserving] is just my way of expressing our environment and what we have here [in Los Angeles.] I think of what I do very similarly to wine. You have these winemakers who are trying to express terroir, a location, and a lot of the winemakers whose wine I enjoy are trying to do it with minimal interventions and the locations speak from themselves.” Koslow draws an easy comparison, considering the ingredients currently on the stove. “Like only using blood oranges from one area, and minimal sugar—let the blood oranges be themselves.”

Those blood oranges, and other produce Koslow uses, certainly are steered away from suffering any sort of low self-esteem, should fruits and veggies endure such psychology. In conversation with Koslow, it becomes slowly apparent that she is a fighter for the underdog, that fruit that gets picked not last from the tree, but last, period, because it’s challenging or unusual. “I like to find varieties that are under-used…that take time to work their nuances out.” It’s all about the little guy, from farm to fruit.

Take the medlar for example. The what? Oh, you’ve never heard of medlar? Not surprising: Koslow explains she recently made a batch of jelly using this rare medieval fruit that only one farm in California grows on a mere 60 trees. That, she tells me, is exciting. Some fruit she just loves because it’s not traditionally beautiful, but turns into a beautiful end product. Of course, it’s not just the blackberries, apricots, or oranges that benefit from Koslow’s attention. She also honors the tradition of preserve-making by using copper pots made for her by a coppersmith in California. 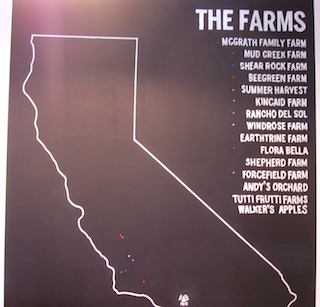 Know your farmers (Lindsay William-Ross/LAist)
Her passionate approach is working; it’s so far, so great for SQIRL in the Silver Lake shop, where she regularly holds classes that find people really engaged and wanting to learn. As she moves SQIRL beyond the jar, she says what’s next is to expand the product line to include tea, pickles, sauerkraut, syrups. “Exploring the world of preserves!” she says. Expanding the line also means expanding the techniques she uses, like dehydration or lacto-fermentation.

So it’s never just about what’s in the jar for Koslow. What went before and what is “beyond” is not only how she feels about her connection to clients and her willingness to make preserved products that fit their specific needs, but it’s also she feels about fresh food and the men and women who grow it.

“I don’t have a green thumb,” she admits, “but those farmers who do and work their land with integrity and are so inspiring to me. I wanted to have a chance to work with these farmers, champion them, and take what I’ve learned from the craft that I was doing and create something that was beautiful.”

You can find Koslow's SQIRL products at spots like The Market on Holly in Pasadena, Proof Bakery in Atwater Village, at pop-up retail events like Artisanal L.A., and online.