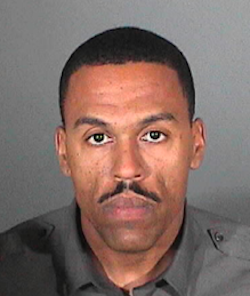 Corey Hogan (Booking photo)
A band leader at an LAUSD high school has been arrested on suspicion of bringing home at 17-year-old student and having sex with her.

Corey Hogan, 32, of Hawthorne was arrested Monday after the alleged victim and her mom went to the police, and he's still in jail today, Hawthorne police told City News Service.

The alleged incident occurred during football season. Hogan is the band director at George Washington Preparatory High School. The girl was on the dance team for Lou Dantzler Preparatory Charter High School in Los Angeles, which was using Washington's facilities for practice. One night the dance team was performing for a game at the high school.

Hogan was arrested at work Monday and booked at the Hawthorne Police Department. His bail was set at $100,000.

This has been the seventh arrest of an LAUSD employee on sex-related since the allegations against Mark Berndt. Pia Escudero, who directs L.A. Unified's mental health and crisis counseling services, told the Los Angeles Times, "As a community, people are coming together and are hyper-vigilant about any other perpetrators. Everything is now being reported."