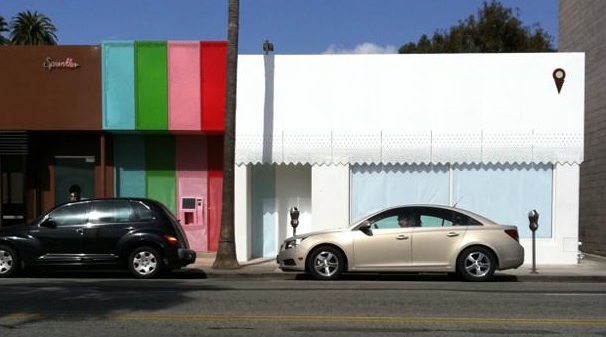 Sprinkles Ice Cream joins their cupcake shop in Beverly Hills. Plus, check out that pink cupcake ATM that will presumably be how you get your 24-Hour-Sprinkles (Photo via Sprinkles on Facebook)

If you're craving a cupcake in the middle of the night, unless you planned ahead and have some on your counter, your only choice might be those nasty ones at your local all-night grocery store. That is, until Sprinkles, one of the L.A.-based bakeries deemed responsible for kicking off the international cupcake craze, launches their 24-hour cupcake access. 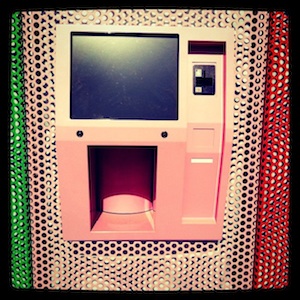 Pink ATM or cupcake vending machine? (Photo via Sprinkles on Facebook)
Oh, and because that wasn't enough, Sprinkles is also planning to open an ice cream shop in Beverly Hills, adjacent to their cupcake shop.

Details are scant, but the photographic evidence is on Facebook, where 24-Hour-Sprinkles and Sprinkles Ice Cream already exist.

The 24-Hour-Sprinkles seems to be some sort of vending machine modeled after an old-school ATM. And it's pink! (Squeeeee!)

No word yet on when either expanded Sprinkle option will be available.

UPDATE 4:45 PM: We got some info from Sprinkles about the ice cream and the 24-Hour access!

Here's what Sprinkles tells us about their ice cream:

Our ice cream will be hand-crafted American ice cream using only the finest ingredients, staying in line with the Sprinkles philosophy. Scooped into crisp waffle cones, pressed between fluffy cupcake tops or piled high into sundaes topped with housemade sauces and toppings, Sprinkles Ice Cream shop is a back to basics creamery with a Sprinkles twist! Sprinkles Ice Cream will also serve up freshly baked cookies and brownies!

And, yep, that's pretty much a cupcake ATM, or, as they call it, the "world's first cupcake automat." More details:

UPDATE: Tuesday March 6
We've just learned that the Sprinkles 24-Hour "Cupcake ATM" is open for business as of this morning!