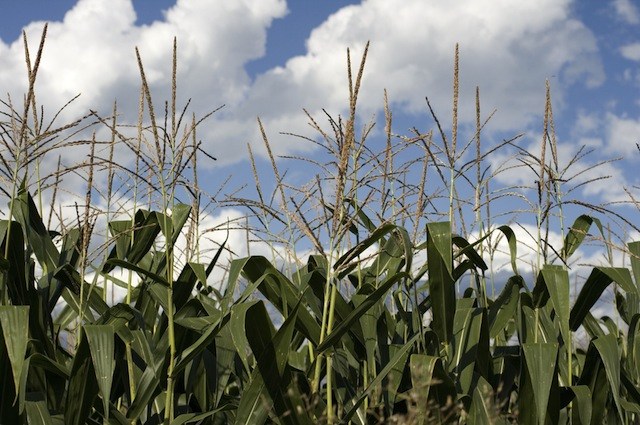 Photo by bepsy via Shutterstock

It's official. Angelenos may be able to vote on a new ballot initiative come November and see a new food label at grocery stores soon thereafter.

One well-known type of GMO is a type of corn owned by the Monsanto Corporation, which is engineered to survive being sprayed with herbicide. The benefit of growing this corn lies in the ability of farmers to spray the crop and kill all the weeds in the field without harming the corn plants. Some brands of food providers choose to label their foods as free of genetically engineered ingredients by noting the product as "GMO-free" or similar, but this is purely voluntary.

Some groups who support the labeling of genetically engineered foods point to a pool of research suggesting genetically engineered foods may have unhealthy effects on the human body, including organ failure, according to studies done in recent years. Other groups point to a long-term environmental toll, decreased food security due to dwindling variety in food crops and concerns over seed patents increasingly concentrated in the hands of a few large corporations.

Opponents of the measure point to government agency decisions that consider genetically engineered foods as no different than other conventionally-grown foods. These opponents say that labeling creates unwarranted anxiety for public consumers.

The new initiative, tracked by number 1570 in the Secretary of State's Office, and 11-0099 in the Attorney General's Office, says:

GENETICALLY ENGINEERED FOODS. MANDATORY LABELING. INITIATIVE STATUTE. Requires labeling on raw or processed food offered for sale to consumers if made from plants or animals with genetic material changed in specified ways. Prohibits labeling or advertising such food as “natural.” Exempts foods that are: certified organic; unintentionally produced with genetically engineered material; made from animals fed or injected with genetically engineered material but not genetically engineered themselves; processed with or containing only small amounts of genetically engineered ingredients; administered for treatment of medical conditions; sold for immediate consumption such as in a restaurant; or alcoholic beverages. Summary of estimate by Legislative Analyst and Director of Finance of fiscal impact on state and local government: Potential increase in state administrative costs of up to one million dollars annually to monitor compliance with the disclosure requirements specified in the measure. Unknown, but potentially significant, costs for the courts, the Attorney General, and district attorneys due to litigation resulting from possible violations to the provisions of this measure. (11-0099.)

The proponent, James Wheaton, must collect a minimum of 504,760 valid signatures by July 13, 2012 in order to place the initiative on the November 2012 ballot.

Local business owners who favor organic, local food from open-pollinated seeds owned by the public may be happy about such an initiative, as will food consumers who feel they have a right to know what is in their food. One local campaign is highly involved in collecting signatures and educating the public about the reasons for supporting this initiative. Labelgmos.org represents a grassroots coalition of concerned citizens and organizations who claim, "It's Our Right to Know." They frequently meet around the city. For more information about GMOs, visit the resources page on the group's website.

Label GMOs is hosting a few events around the county this weekend and on Monday:

East L.A. Farmers Market
Though today's 9am meeting has passed, LabelGMOs will be gathering signatures at the East Los Angeles Farmers Market every Saturday from 9am to 2pm through April 21. If you have already been trained, please stop by and pick up you petitions sheets and begin getting those signatures.

Tabling at Studio City Farmers Market
Sunday, February 26, 2012 at 8am
LabelGMOs will be gathering signatures at our very own TABLE at the Market! This is an amazing opportunity to reach people and get many signatures.

Signature Training in South Pasadena
Monday, February 27, 2012 at 7:30pm at Grassroots Natural Market.
A special training session for those who could not make it be fore our start date and for those who just found out about our campaign and want to join us. There is still plenty of time to get involved!

RSVP for these events and learn more here.

Previously in Label GMO 2012 Campaign coverage:
Tofutti, Tofurkey Or Turkey?
Is California Poised to Change the Nation's Food Landscape?
Hidden in Our Food: GMOs & Your Right to Know
Exercise Democracy at The World Food Day Rally
Mary's Gone Crackers & Speaks Out Against GMOs
Label GMOs Initiative Filed, Will You Sign?
Get Trained To Help Combat GMOs In Our Food