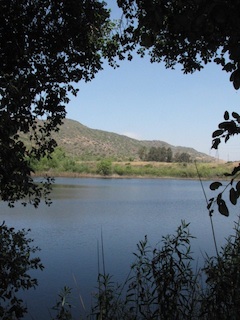 It’s common to joke about how the Los Angeles Lakers play in a city that has no natural lakes. However, while many L.A. residents are aware that the basketball team’s nickname comes from their days in Minneapolis, few realize that an hour’s drive from downtown, in the hills of Orange County, there is in fact a lake.

Believed to be fed from an underground spring, Barbara’s Lake is the only naturally occurring body of water in inland Orange County. It is located in the Dilley Preserve section of Laguna Coast Wilderness Park, not far from one of the county’s busiest freeway interchanges, the infamous El Toro “Y”. Yet, other than some noise from the traffic on nearby highway 133, Barbara’s Lake is a peaceful and quiet place to spend an afternoon. Wildflowers make spring probably its best season, but the trails are moderate enough that they can be a year-round destination, except perhaps on the hottest summer days.

There are several possible routes to the lake. The easiest and quickest is on the appropriately named Lake Trail, which leaves the parking lot and follows a more or less level course, reaching the lake in about a mile. You can sit on its banks and enjoy the scenery before either returning to your car, or continuing uphill.

If you decide to extend your hike, you can climb the Edison Trail, which rises three hundred feet to a ridge on the east side of the park. Here, you reach a hub where several other trails, including the Mariposa, Canyon and Ridgetop converge and head downhill. In addition to the lake, other scenery here includes prickly pear cacti, oaks, willows and nice views of the canyon. If the air is clear, you’ll see the dominant shape of Old Saddleback to the north, and perhaps a glimpse of Mt. Baldy.

To get to the Dilley Preserve, take I-405 to highway 133. Head south for 4.8 miles and take a U-turn just before the 73 Freeway overpass, and the park will be on your right. Admission is $3 per vehicle on weekdays, $5 on weekends and $7 on holidays. The parking lot hours are 8am to 5pm. Dogs are not allowed.

As of this writing, there is talk of the possibility of the Sacramento Kings basketball team moving to Orange County. If that happens, they may have a more legitimate claim to the name Lakers than their famous counterparts in downtown Los Angeles. Regardless of what happens in the basketball world, Barbara’s Lake, the Dilley Preserve and the rest of Laguna Coast Wilderness Park are great recreational destinations for Orange County and Los Angeles residents alike.