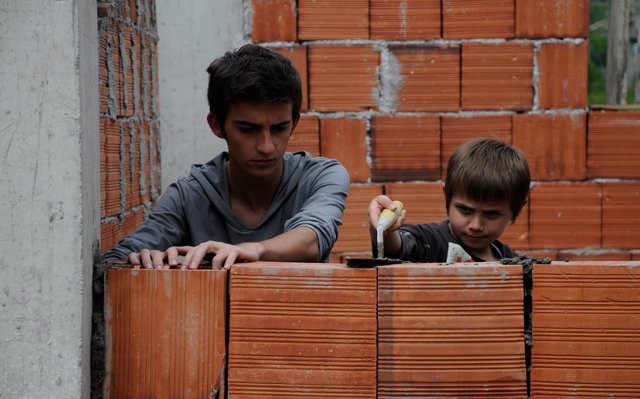 Pardon our dust... THE FORGIVENESS OF BLOOD courtesy IFC Entertainment.

We're switching up the Weekend Movie Guide a bit this week. You'll find quick links & listings immediately below, followed by capsule previews & trailers for every new release. Let us know if you like.

See you at the movies!

U.S. Navy Seals play themselves in Act of Valor. Shot over a period of 2 years (to accommodate the Seals' active deployment cycle), the action is unique in that it was shot with real guns, live ammunition & equipment fresh from the battlefield. Thankfully, the story, concerning the rescue of a CIA operative amid a transcontinental terrorist plot, is fictional. Stuntmen Mike McCoy & Scott Waugh direct from a script by Kurt Johnstad (who co-wrote 300 with Zack Snyder).

The Forgiveness of Blood is an Albanian drama about two teen siblings struck by the hard end of tradition. When a multi-generational family feud turns violent, Nik (Tristan Halilaj) learns an ancient regional law dictates his death is the only way to balance the bloodshed. Since he's become a prisoner in his own home, his sister Rudina (Sindi Lacej) must drop out of school to help the family make ends meet. Journalist turned filmmaker Joshua Marston (Maria Full of Grace) directs his screenplay, co-written with Albanian documentary producer Andamion Murataj. The Forgiveness of Blood opens exclusively at the Nuart.

Amanda Seyfried has seen great success on HBO, but only a little love from moviegoers. To her credit, she keeps trying new genres while she stalks that break-out hit. Gone, her first of five movies this year, is a full-on revenge thriller. Seyfried plays a serial killer survivor who has 24 hours to track down her former captor when he takes her sister. Writer Allison Burnett (Untraceable, Underworld: Awakening), brings her best thriller background, and fellow premium cable castaway Jennifer Carpenter (Dexter) is no slouch when it comes to serial killers either.

Tyler Perry takes a rare leading role outside of drag for his latest, Good Deeds. This time, Perry plays the titular Mr. Deeds (no relation to Gary Cooper or Adam Sandler), a nebbish businessman looking for love with a hard-working cleaning woman. As with his other pictures, Perry manages everything behind the camera too - writing, directing, producing and shooting at his eponymous Atlanta studio. And since he does it his way, a spin-off sequel may find these characters asking Why Did I Get Marri3d?

Iranian Taboo, like many documents coming from the region, was captured by dedicated amateurs and smuggled to the West under threat of death. The documentary outlines Iran's historic oppression of the Baha'i faith through rare interviews with Iranian intellectuals, including scholars including Nobel winners & the country's first President (later impeached). Additionally, it follows the daily struggle of Nadereh, a Baha'i mother trying to flee the country with her 14-year old daughter. Iranian Taboo plays for one week only at Laemmle's Beverly Hills.

Wanderlust should have been subtitled The Cult of Rudd. The yuppies-meet-hippies comedy (this time, Our Idiot Brother's firmly entrenched on Team Yuppie) reunites Paul Rudd with Role Models director David Wain, who co-wrote this film with Ken Marino. The trio are members of sketch comedy troop The State, as are cast-and-cameo members Michael Ian Black, Michael Showalter, Joe Lo Truglio & Kerri Kenney (even Lauren Ambrose - best known for Six Feet Under - made an appearance on one of The State's last shows for MTV). You may also be familiar with their previous collaboration Wet Hot American Summer. The cult connections keep coming - Rudd brings back one of his dear Friends, Jennifer Aniston, and an Idiot ex, Kathryn Hahn. The missing link is M*A*S*H's Alan Alda, but now he too has been initiated into the Cult of Rudd. Far out...

That's all for this week. What will you be watching this weekend?