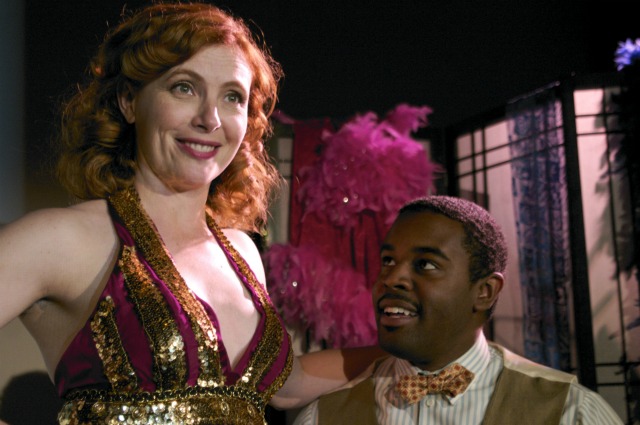 Carson Kreitzer's snake-centric love story, Slither, is currently playing at the Masonic Lodge inside of Hollywood Forever Cemetery. Kreitzer's script depicts five generations of empowered women, from biblical Eve to a modern day Christian snake cult member, connected to one another through blood and snake handling. True to their mission—presenting theatre in unconventional spaces—this Chalk Repertory (Chalk Rep) production takes place within a stately sacred space within the Masonic Lodge that previously was not open for women to enter. Slither features intriguing plot twists, charismatic performers, and an alchemistic take on theatrical space. 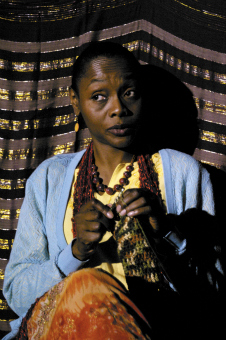 Inger Tudor in 'Slither' (photo by Jeff Galfer).
Slither opens with a meditative monologue by Inger Tudor in the role of biblical Eve. The willowy and graceful Tudor lends a contemplative and transcendental mystique to Eve that is refreshing and easy to bask in. Amy Ellenberger plays the central character of Fanny Lou. Ellenberger is engaging and coquettish as a strong-willed matriarchal snake charmer, infusing the character with constant warmth and brightness. Teri Reeves is Evie, a young woman struggling to find meaning in her own existence. Reeves skillfully pits conflicting emotions and traits against each other, giving Evie depth and reserved purpose.

Lina Patel plays numerous parts in Slither. As Aevah, a priestess in an ancient snake, Patel is appropriately dark and mysterious, with just a touch of somber, attention-grabbing creepiness. Patel also plays Lee, a small but crucial role that she imbues with authenticity and realism. Tobie Windham plays two roles—Adam, an over-the-top romantic married to Fanny, and also, toward the end of the play, biblical Adam, a paradigm that really shows his range as an actor. Windham is animated and full of energetic cheer as the less ancient Adam, while his portrayal of biblical Adam is steeped with savory thoughtfulness and empathy.

Finally, Brian Slaten plays all of the Slither bad guys, but predominantly is seen on stage as Harlan. Slaten captures the essence of Harlan's Bible-thumping and wife-beating persona through effectively frightening and grim backwoods machismo.

Kreizer's writing is at times, but not always, just a little bit too trite and self-satisfied, and certainly goes a bit overboard with romantic notions. Casey Stangl easily overcomes this through invigorating direction, wide use of the performance space, and by fostering a highly voyeuristic atmosphere to summon the audience. Set design by Tom Ontiverso ranges from simple to lush, but his lighting design is excellent, and often culls eerie intimacy. Lastly, an original sound track by Michael Shapiro and Jamieson Trotter, lends multitudes to the overall enigmatic ambience of Slither.

Slither is playing at the Masonic Lodge inside of Hollywood Forever Cemetery through March 4. Tickets are $25 and available online.