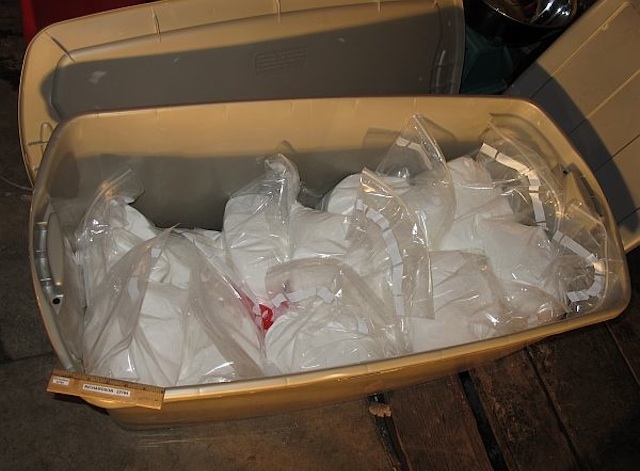 Dope on the table in a bin (L.A. IMPACT)

Two people were busted at a UPS store in Culver City on Wednesday trying to ship PCP as a part of a multimillion dollar operation based in Los Angeles.

The arrests of Darryl Dwayne Burton, 55, and Lagina Bell Huckaby, 31, who were allegedly trying to ship drugs were just the tip of the iceberg. The Los Angeles Interagency Metropolitan Police Apprehension Crime Task Force (or L.A. IMPACT) ended up seizing 130 gallons of PCP, chemicals for making 500 more gallons, semi-automatic weapons and $389,000 in cash locally, according to City News Service.

Investigators found the drugs in homes and storage facilities around Los Angeles. They believe the local drug ring affiliated with the Bounty Hunter Bloods street gang distributed the drug to Texas, New York and Washington, D.C.

"It's the largest PCP seizure I've ever heard of," said Lt. Scott Fairfield of L.A. IMPACT.

How you want to tabulate their bust in dollars depends on whether you want to talk about wholesale or retail prices. If you sell 130 gallons of PCP by the gallon, you can get $1.5 million, but that much PCP can retail on the street for $100 million, according to The Daily News.