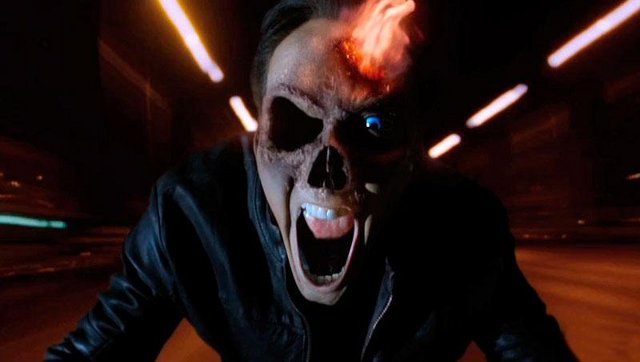 GHOST RIDER: SPIRIT OF VENGEANCE will melt your face! (Whether you want that or not is up to you.) Courtesy Columbia Pictures.

Madcap directing duo Neveldine & Taylor have a thing about setting people on fire. Crank: High Voltage ends with Jason Statham engulfed in flames, and now Ghost Rider: Spirit of Vengeance has Nic Cage running on crazy in human form while burning rubber (& bodies) as the ghoulish Ghost Rider. Hardcore fans may balk at the PG-13 rating, but Jonah Hex (another supernatural adaptation the duo wrote) showed they can keep an audience saying WTF, even when their characters can't.

Whenever Cinefamily books a film for a week, it instantly signifies a quality picture. When it elicits such a strong response that programmer Hadrian Belove sends a passionate email defending the choice, its power is confirmed. Such is the case with Michael. The film's teaser presents a no-frills account of a simple man living a lonely life. Or does it? Why are there bars on the windows? Why is the basement sealed tighter than a bank vault? If you want to go in cold, steer clear of Cinefamily's website. All you need to know is that this haunting Austrian drama screens daily around 5PM.

The Secret World of Arrietty shares a story centered on buried secrets. As it's the latest from Studio Ghibli (Spirited Away), it's infinitely more friendly. The film follows a family of Borrowers, tiny people who build their homes from bits of ours. The English language version opening this weekend features voices from Disney darlings Bridgit Mendler ("Good Luck Charlie"), David Henrie ("Wizards of Waverly Place") & Moises Arias ("Hannah Montana") for the kids, and Amy Poehler & Will Arnett for the adults.