Women and Their Monologues: 'For Colored Girls Who Have Considered Suicide When the Rainbow is Enuf' 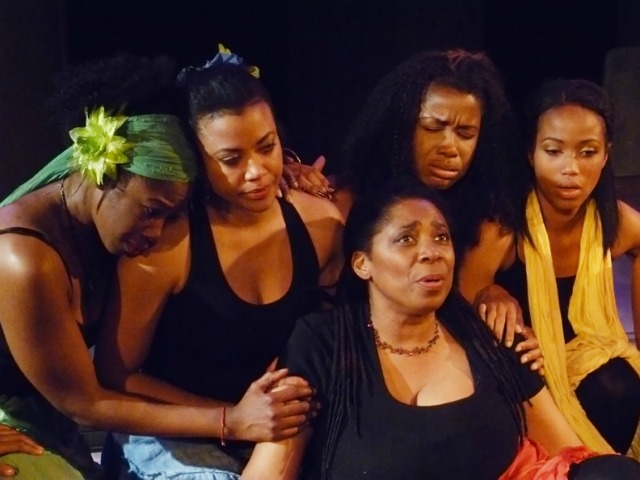 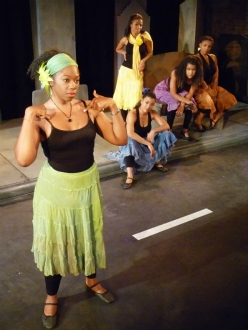 Nia Witts opens the show as the Lady in Brown with an emotionally charged jolt of somber, pleading energy. While surely difficult to open a show on such a strong note, Witts succeeds brilliantly, grounding the audience and bringing viewers immediately into the heart of the play. Yvette Saunders renders her Lady in Blue role with surety and upbeat confidence that gives way to intense warmth and affecting angst. Lady in Green, played by Samiyah Swann, has a less dominant role, but when she finally offers up her poem to the audience, she is robust and full of vitality. Ciji Michelle Campbell's smoky voice lends unique depth to the Lady in Purple as she brings earnestness and diligence to her monologues. Monica Quinn as Lady in Orange has perhaps the most fun dialogue of the entire play, one which entails her kicking a man out of her bed because she is too busy to deal with him after their one-night stand. Quinn's dialogue brims with gratifying defiance and spirited satisfaction. The demure Mystie Galloway skillfully transitions the Lady in Yellow from a dreamy boy-crazy teenager to a trauma-enduring woman with graceful and a refined stage-presence. Galloway strives to make a personal connection to every member of the audience.

Under the direction of JC Gafford, For Colored Girls Who Consider Suicide When the Rainbow is Enuf is engaging and enchanting, but also full of dynamic magnetism. Derf Reklaw provides live music that adds lightness and fluidity to the production, like a mental palate cleanser between monologues.

Shange's work makes it blatantly obvious how much the world has changed for American women—if written today there would surely be more monologues about careers and fewer about men, and Facebook friends might trump musical outlets during times of duress—but at the same it highlights how very little human nature changes over time. And most importantly (at least for this reviewer) it is simply enthralling and a great honor to see such a concentration of high-caliber actresses on a single Los Angeles stage.

For Colored Girls Who Have Considered Suicide When the Rainbow is Enuf is playing at Lyric Theatre through March 17. Tickets are $20 and available online or via phone at 323-960-1055.