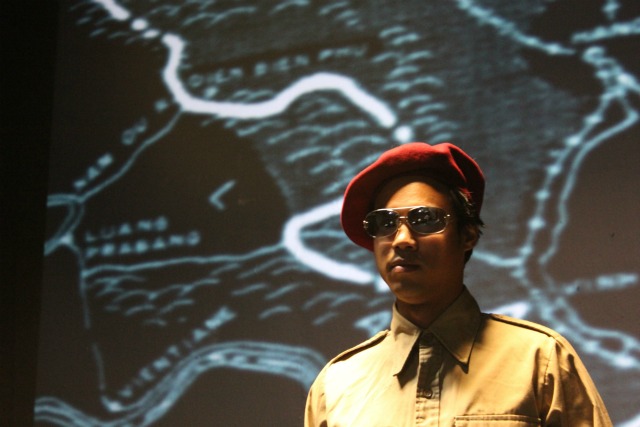 Pentagon Papers, a staged adaptation of the long-hidden history of the Vietnam War based on the Department of Defense documents that are colloquially known by the same name, is currently playing at the Santa Monica Playhouse. While the infamy of the subject matter presented could have resulted in a gripping historical drama, and while it is clear that writer and director John Power meant well, this production is painfully slow and untheatrical. In fact, it bears more resemblance to a class presentation of a history project than a play. For those interested in watching other people tell them the highlights of the Pentagon Papers in a blase hum-drum manner, this show would be ideal. Unfortunately, that is the opposite of what audiences are looking for when they take the leap and buy a theatre ticket.

Please note that this review should be taken with a grain of salt as this critic left at intermission — the first act of Pentagon Papers was so uncompelling and tedious that there was just no justification for sitting through a second hour of this uncreative and dull laundering of history. 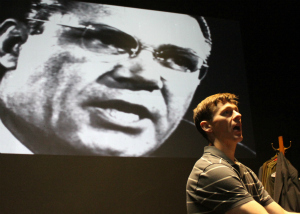 Dave Kirkpatrick in 'Pentagon Papers' (photo by PowerPlayz).
The cast of Pentagon Papers consists of a mixture of faces familiar to the Los Angeles theatre scene as well as newcomers. Jeffrey Ashkin, Serena Dolinsky, Caroline Do, Mark Jacobson, Stephen Juhl, Amanda Martindale, Dave Kirkpatrick, and Brian Sounalath do a fine job of doing what the script requires of them, which is very little. It seems unfair to pass any sort of judgement on the performers as the entire play is delivered with an intentionally flat affect but Dolinsky, Jacobson, and Juhl did shine a bit brighter than the rest of the cast as they clearly took time to carefully craft their phrasing and inject some charismatic attention into their roles. A big problem with this work is that it lacks passion and does not require the skills of professional actors to perform. The script is so limited in so many ways that it is questionable as to whether it even belongs on the stage. It does not bring the crucial and alarming facts of the Vietnam War to life for its audience, but instead induces an unwarranted deja vu trip down memory lane to a freshman-year college group project that did not go over so well.

While writer-director Powers should be commended for attempting to share the Pentagon Papers with audiences, he failed to do so in a provocative way. Facts are blandly hurled at the audience at such a high rate, that it is impossible to retain them. Furthermore, the lighting, costuming, multimedia, and set design for Pentagon Papers lacks inspiration. It is as if the stage crew simply just didn't try very hard to make the play look theatrically good. Undoubtedly, the veterans and victims of the Vietnam War deserve a better play to honor their sacrifice and tragedy than Pentagon Papers provides.