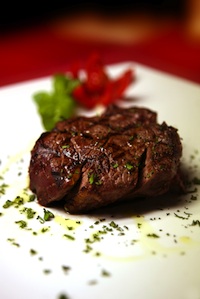 Steak via Shutterstock
Mark McHenry thought that he was developing a rapport with the staff at Landmark Steakhouse where he was a regular customer. That is until he looked through his receipts that identified him as "McStinkyNigger," "McNigShit" and "McCottonwood."

McHenry sued them this spring for discriminating on the basis of his race and has settled for an undisclosed amount, according to the OC Weekly.

Before he noticed the receipts, McHenry used to enjoy going to the steakhouse in Corona del Mar. Sure, sometimes the wait staff would make jokes about him being probably one of the few black guys in the joint: they'd say “black is the new white” or tell him that he was "getting served before the white people,” according to the Orange County Register. And sometimes he'd notice the wait staff gathered around the register, looking at him and laughing. It didn't occur to him that he had been the butt of their joking until he noticed the receipts.

“As a result of these racist acts, plaintiff has lost his trust in the community. He feels … ridiculed, isolated, angry and embarrassed,” the suit against Landmark said.

One bartender at the restaurant was fired as a result of the receipts, according to the Weekly. The bartender begged McHenry for forgiveness in a text: “I will do whatever you ask of me. I know I made a big mistake by crossing the line. I have a family & mortgage that depend on me. I know ur furious."

Lately, fast food restaurant workers have been getting in trouble for the racist slurs they're using to label their customers on receipts. A Chik-fil-A worker in Orange County got fired for labeling two Asian customers "ching" and "chong." A Papa John's worker got fired for calling an Asian customer "lady chinky eyes."