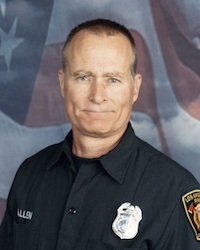 Glenn Allen (via LAFD)
When a blaze broke out in a Hollywood Hills home late on the night of February 16, 2011, among the Los Angeles Fire Department firefighters responding to the scene was Glenn Allen. When the luxury home's water-logged ceiling collapsed, Allen was critically injured, and he died two days later while hospitalized. Now the architect who designed the home, including its controversial "fire pit" feature, is facing an involuntary manslaughter charge in Allen's death.

"Prosecutors allege that Becker, a German national, built an 18-foot 'fire trough' through the home despite being warned of the dangers it may cause. It was described as an oversize indoor fire pit," elaborates L.A. Now.

Five other firefighters were injured in the ceiling collapse.

As a bittersweet postscript, Allen became a first-time grandpa the day after he died. He was remembered in a Downtown service and processional attended by thousands.

Becker, who served as the new home's main contractor, was charged after investigators found alleged evidence of grossly negligent construction, notes CNS. He had been out of the country since the time of the fire, but was arrested Saturday at Los Angeles International Airport when he arrived on a flight from Spain, authorities said.