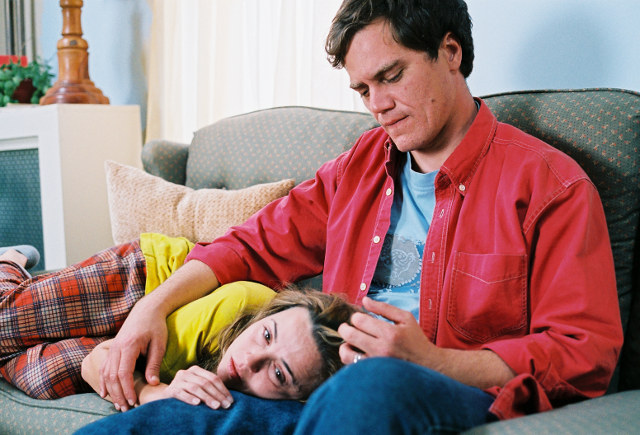 Linda Cardellini loses touch with life off the battlefield in RETURN, as husband Michael Shannon struggles to understand her. Courtesy Return, LLC.

As Cupid draws his arrow, Hollywood releases a romantic cash-in. The Vow claims to be "inspired by true events", but it may just be the greatest story Nicholas Sparks never wrote. Fans of his film adaptations will eat up Rachel McAdams (The Notebook) and Channing Tatum (Dear John) as newlyweds forced to fall in love all over again after an accident wipes her memory, sending her back into the arms of an ex-fiancee (Scott Speedman, "Felicity"). Michael Sucsy (HBO's Grey Gardens) directs from a script by Abby Kohn & Marc Silverstein (Valentine's Day).

A peek into Tatum's back catalog also reveals Stop Loss, one of many after-the-war films embodying a soldier's conflict continuing long after coming off the battlefield. These tales are typically told from a male perspective (Brothers, The Hurt Locker, etc.), but Return (opening exclusively at Laemmle's Santa Monica) illustrates that post-traumatic alienation isn't bound by gender. First-time writer/director and full-time visual artist Liza Johnson drew inspiration for the story from a friend's difficulty fitting in with "the 99% of the country that is not fighting" after a tour of Iraq. To prepare for Return, she consulted with countless military men and women on their experience, as did lead Linda Cardellini (Brokeback Mountain). Michael Shannon costars as Cardellini's husband, trying to hold her together without any real idea of what she's been through. Cinematographer Anna Etheridge (whose feature work is primarily documentaries like The Light in Her Eyes) echoes Cardellini's character's struggle with an earthly palette. It's the same world, with the same people, it's just...different.

Speaking of different, Stars Wars is reborn yet again this weekend with the 3D re-release of The Phantom Menace. Considering that film alone grossed almost a billion dollars in its original run, it's surprising that promotion for the new edition has been so low-key. Of course, nothing could fly under the radar of internet fans who still can't forgive George Lucas for the prequels and tweak-quels. We've neither the time, space, nor desire to enter that messy debate - but personally, there's room for both Storm Troopers and Clone Troopers in my household. I'll never forget growing up with the original trilogy or ditching class to catch The Phantom Menace on opening day. It's exciting that another generation is able to experience Star Wars on the big screen - in any dimension. May the force be with them, as it was with me. That's my new hope.

See you at the movies!