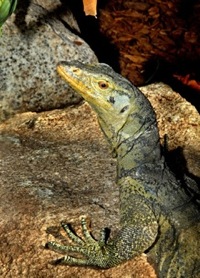 The Gray's Monitor, an endangered lizard species (Tad Motoyama/Los Angeles Zoo)
If snakes and lizards are your bag, you're in luck — the LA Zoo is opening a new home for reptiles and their scaly ilk.

Called the LAIR (Living Amphibian, Invertebrates, and Reptiles), it will feature six exhibits that will house over 60 species, including snakes, poison dart frogs, giant horned lizards and banded iguanas. Some exhibits will include an underwater viewing area, and visitors will also be able to see behind-the-scenes into several of the zoo's nurseries and egg storage areas.

A few of the species that will find a new home in the City of Angels are endangered, and represent what the zoo calls in a statement its "reptile and amphibian focused conservation initiatives."

Betty White will be starring in a campaign to promote the new exhibit, which will be open to the public starting Thursday, March 8.