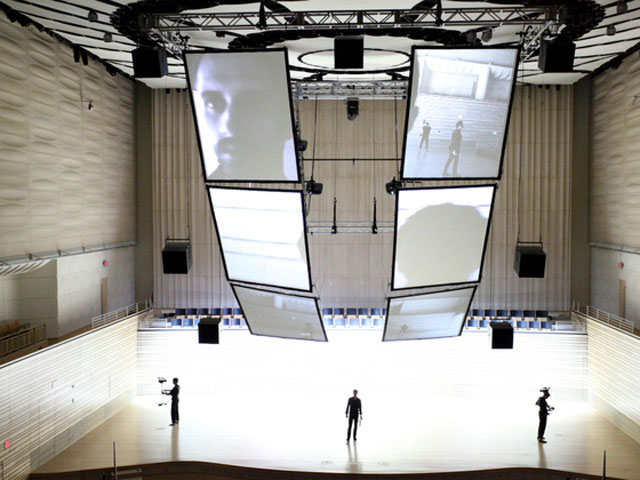 'Abacus' wrapped up its run at REDCAT this weekend. (Photo: Early Morning Opera)

by Ellen Reid / Special to LAist

The Thursday night opening of Early Morning Opera's Abacus at REDCAT felt like a joyful reunion for L.A.'s art scene. Abacus got its start at the REDCAT NOW Fest in 2009 and has since traveled to various residencies and performance venues, including the 2012 Sundance Film Festival. Abacus' triumphant return to REDCAT generated a palpable enthusiasm that filled the house on opening night.

Abacus is a visually rich piece in which Paul Abacus, a “multi-media visionary,” shared (and lectured on) his theories of global visual culture as well as national boundaries. His theories—ranging from why we should dissolve national borders to what religion in the modern world means—were supported with visually dazzling graphs, maps and images. In addition to the well-crafted presentation for the eyes, there was also a soundtrack that supported the action and somehow persuaded the audience sonically.

Paul Abacus, the “debatably fictional” character created by Early Morning Opera, was embodied by an anonymous actor, whose performance was riveting through the entire piece. As Abacus, he personified a wide emotional range with utmost conviction and intensity. The visuals, performance and sound worked together to make the audience agree with Abacus and then question why they agreed with him.

But at times it was unclear where Early Morning Opera stood on the ideas that Abacus expounded. Paul Abacus spoke with equal vivaciousness and commitment when he conveyed ludicrous ideas as he did when he unveiled truly beautiful and insightful concepts. This contrast was jarring but certainly thought-provoking. For example, once Abacus was explaining the relation of various trends by looking at graphs of the trends. He then stopped and said that the graphs he had been showing had no correlation whatsoever. The audience would have never known had he not let them in on his secret.

This constant battle between believing and questioning lies at the core of Abacus. In an interview with the TED foundation, Abacus director, Lars Jan said, “Abacus is about is increasing visual literacy so that people are better able to discern good content from bad, and truths from fiction or propaganda more easily.”

Jan’s direction certainly called attention to and exposed how susceptible our brains are to propaganda. Abacus was crafted on a visual, sonic and performative level to force the audience to believe what they hear and see, then question their belief. It was as if we were a witness to an experiment on our own brains, and somehow, we liked it. (At least that's what Paul Abacus wanted us to do.)