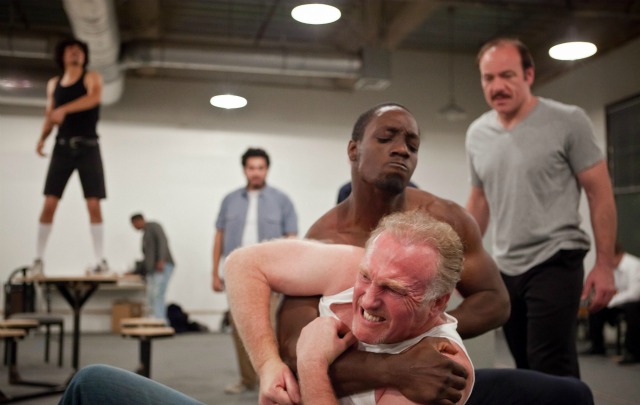 After a successful run in 2011, Urban Theatre Movement is bringing its brilliant production of Short Eyes back to the stage for another six weeks at Los Angeles Theatre Center. This marks the first time a Los Angeles stage has had the honor of presenting the biting realism, hard desperation, and poetic dialog of Short Eyes for well over a decade.

Miguel Piñero wrote this seminal work in 1973 during a writing workshop for inmates while serving time at Sing Sing—one of New York's most notorious prisons. After successful runs both on and off Broadway in 1974, Short Eyes went on to win both Obie and Tony awards for best play.

LAist: Short Eyes is an exhilarating, intense, and taboo-breaching play. How did you prepare the cast for Piñero's heavy dialog?
Julian Acosta: It can be uncomfortable for actors to immediately deal with the racial epithets in the dialog, so the biggest thing was breaking down the script to really give the actors permission to unapologetically pursue and advocate for their characters. Whether it is at their most human or inhuman, their most racist or at their most understanding, if you're afraid of the racial and sexual dynamics, the play doesn't work. The actors need the freedom to go at each other with those dynamics and really wield them.

Members of the cast contend with being spit on, full nudity, yelling, fighting, racial slurs, sexual tension, and pedophile taboos. What were some of the reactions that the cast had to all of this scripted abuse?
JA: Honestly, when it came down to it, everybody understood the job at hand. There were never any "I can't do that" or "I don't feel comfortable" complaints. We asked ourselves how can we best serve this play? Everybody was on board from the jump knowing that the only way to do that was to honor what Piñero wrote. So we named each beat of action and talked it out. This is going to sound weird but, we want people to come in, sit down, and leave traumatized in one way or another. Positively or negatively, we want the audience to have an experience that feels real.

You took some liberty with age when casting. What did you look for when selecting actorsShort Eyes?
JA: Part of Urban Theatre Movement's mission is to bridge the gap between the non-professional and professional acting worlds. We wanted to keep a good mixture of experienced actors and actors that we've never met, while at the same time finding the best person for every role. So for example, Miguel Amenyinu who played Omar and Donte Wince who played El Raheem—this is their first professional play. As far as age, I told Mark Rolston that I could care less about his age because he really embodies the role of Longshoe. And the same thing is true for Karl Krudup who plays Ice. I really love him as Ice. His age adds something, this weight, this different element that works really well.

What has your Short Eyes JA: A nightmare! (Laughs.) It is amazing and terrifying, joyous and painful. It is a lot of work, but at the same time it is a gift to work with such a great cast. I felt a lot of pressure because I have never directed a play before Short Eyes so everybody was like, you know, who does this guy think he is? But I wanted to direct a play for a very long time and the way that this experience has unfolded has been pretty serendipitous. As a Puerto Rican man, directing this play is just kind of mind blogging—especially meeting Piñero's brother. When I become an actor, I went to the library to look for plays by Puerto Rican writers and there was just Jose Rivera and Miguel Piñero. Those were the only two that existed at the time. So it hard to articulate what it feels like but it is definitely something special for me. It is a humbling experience. 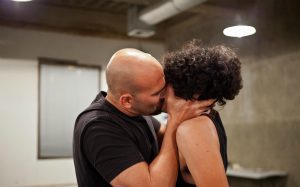 Has directing Short Eyes changed your perception of prison inmates?
JA: It has changed my perception. It has made it so clear that we have an "out of sight, out of mind" mentality toward people in prison. In the United States, we incarcerate more people than any other industrialized county, so however you want to look at it, just that fact alone is interesting to say the least. We should probably think about that. There are racial and political implications of it all. Also, everything that happens in the outside world, all of the little petty dramas and ploys that people have, the exact same things are happening inside prisons. It is just a whole different set of rules in a way. There are complete systems of government and currency inside prison. But inmates do the same things as everybody else. They fall in love. They fall out of love. They jockey for power. And do what they have to do to survive.

Short Eyes has very believable fight scenes. What does it take to get good fight choreography on the stage? (Warning: this question is a bit of a plot spoiler!)
JA: Story-telling. Story-telling is the most important thing. The fights have to tell a very specific story. Like the scene with Clark at the end, I want the audience to feel what Clark feels. There is no respite. It was just one hit after the other after the other after the other and then they slit his throat. Real violence is very non-cinematic. It is so abruptly disturbing. I wanted to make sure that people had an experience that was terrifying. Audience members react to the moment when they have Clark and he is just screaming. To set that up I needed someone who really understood the story, that I could work with, that was willing to put up with me, that didn't mind that I am a pain in the ass. I think our fight choreographer did a great job with that.

Short Eyes feels so realistic, like really being in prison!
JA: I'm glad it feels that way. I don't want an easy transition. It should not just be sitting in a theatre, but rather more like BAM! (smacks hands together) you're in prison too! It is really important to me that we keep the audience close to the action so that we can honor the realities of Short Eyes in every way. I want it to be loud and obnoxious and jarring because that is what it is like on the inside—it is always loud, uncomfortable, and torturous. The actors are awesomely accommodating and really want to give the audience that experience. We set that aesthetic right away. Everybody is on the same page from the lighting on down to costumes and set design.

What are the social implications of a play like Short Eyes? (Warning: another plot spoiler question):
JA: I think that the biggest social implication for me is that each person has a story to tell. As far as prison inmates go, people like simple answers, so we label them. But once we label someone an inmate, they don't have a story anymore. They are just an inmate in a jumpsuit and we don't have to deal with or address the fact that they have a story and a family. Once they have that jumpsuit on, they are no longer people, just objects to be punished. But inmates have or have had aspirations and dreams and disappointments. Through their own behavior and decisions they have somehow gotten into situations that are very unpleasant, but they don't ever stop being human beings. The other aspect is, we have a character accused of child molestation and that is a very, very loaded issue. How do we deal with that? What are the social implications for the audience? Some people clap when they kill Clark. Some people are terrified when they kill Clark. Some people don't hear Clark say, "I have some rights." That dynamic is an unhappy marriage but Clark has done something so outside of what we would consider to be any way redeemable. I don't know that the play necessary answers any questions, but it does ask a lot of them.

What do you most love about Short Eyes?
JA: I love its unapologetic humanity. That is really it for me. It isn't banal, or trite, or preachy. It is exactly what theatre should be: It shines like a freaking magnifying glass, with the sun coming through it, and on one end, it is like fire.

What did you love most about directing Short Eyes?
JA: Working with the actors. I love our cast. Watching actors that have never done a professional play before just get up there and shine and kill it with people who have been doing theatre for 30 years, that is really special. And experiencing our audience. They are a pretty involved crowd. We had a guy pass out during Clark's monologue. He couldn't take it. He just got up, tried to leave because it was too much for him, and then passed out as he was leaving. I got up and scooped him up. And then he came back to watch the play again!

Short Eyes is returning the stage at LATC. It is really rare for a play to run longer than six weeks in Los Angeles. How did that decision come about?
JA: That decision came about very painfully. The theatre is available. Our first run was really successful and people really responded to the play in an amazing way. We believe in the show and the cast and that people will come. We just aren't ready to stop. And maybe we are wrong. Maybe nobody will show up in the next six weeks, but we really want to continue to share our work. It was a tough decision for us financially because we are a small company and it is a very big risk for us. I think shows should have long runs! People get low esteem about theatre here in LA. When people invite me to go see a play that they are in, they ask apologetically. But I tell them you should be proud to be in a play! People say you know people don't do long runs in LA, but we're like screw it, we're gonna do a long run. Again, maybe we will fall flat on our face, but as a company, one of our goals is to always be reaching for that which is just out of reach.