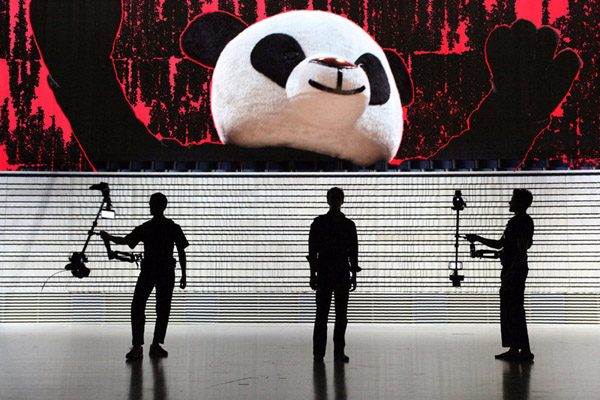 A scene from 'Abacus,' which opens at REDCAT tonight. (Photo: Courtesy of the artist)

- by Ellen Reid/Special to LAist

Fresh from the 2012 Sundance Film Festival, where it was only one of two live performances selected to participate, Early Morning Opera’s Abacus opens tonight at REDCAT and runs through Saturday.

Abacus uses TED-style presentation techniques alongside visuals reminiscent of a Sunday in a megachurch to create an uber-persuasive experience. Abacus stars Paul Abacus, “multi-media visionary,” who uses the stage as his soapbox to expound his theories of global visual culture.

Throughout the show, director Lars Jan helps Abacus address the constant struggle between quality of content and propaganda in our culture. Audiences can expect to be absorbed by visualizations of a variety of flavors that magnify and illustrate Abacus’ theories. The immersive visuals are made to directly confront the audience in an overly persuasive way.

Jan, the founder of Early Morning Opera and a 2011 TED fellow, is a director, designer, writer and media artist. Last summer, his satirical A Suicide Bombing By Invitation Only rocked the Hi-Lite Gallery (LA) as well as the Whitney Museum (NYC). In 2009 a former version of Abacus was shown at REDCAT as part of the NOW Festival.