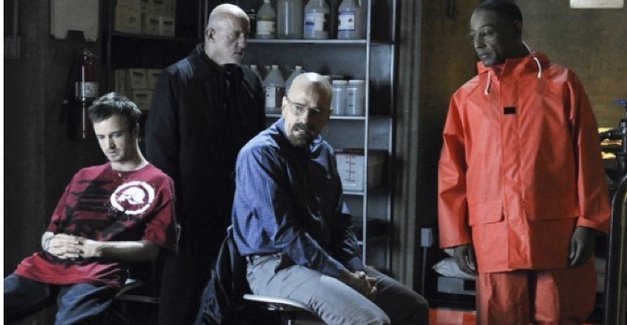 The cast of AMC's "Breaking Bad" have been consistent for years and had a spectacular season last summer - just give them the SAG award already! Tonight!

A couple weeks ago we got 6 out of 11 in the Golden Globes TV categories so we think have a chance of doing even better dealing with the Screen Actors Guild. I can't begin to relate how disappointing it is to not see a single show from FX being represented with a nomination this year in any category with so many great comedies and dramas. The comedy nominees this year are again, truly pathetic: Missing "The League," "Bored To Death," "Curb Your Enthusiasm," just to name a few. Still, we've got to make the best of what we've got.

The following are the SAG Awards nominees in the TV categories. Watch the awards today at 5pm on TNT, TBS or TNT.TV:

Outstanding Performance By A Male Actor In A Television Movie Or Miniseries
Laurence Fishburne, Thurgood
Paul Giamatti, Too Big to Fail. I'm admittedly terrible at picking the mini-series winners but since the SAG should be looking at performance vs. hype, it's impossible to ignore how great Giamatti was in this series. Should Win / Will Win
Greg Kinnear, The Kennedys
Guy Pearce, Mildred Pierce
James Woods, Too Big to Fail

Outstanding Performance By A Female Actor In A Television Movie Or Miniseries
Diane Lane, Cinema Verite
Maggie Smith, Downton Abbey "Downton Abbey" fans/fiends will want to see her walk away with what should be a win for her. Should Win
Emily Watson, Appropriate Adult
Betty White, The Lost Valentine
Kate Winslet, Mildred Pierce Will the Golden Globe winner repeat here for what was an otherwise extremely boring miniseries? Will Win

Outstanding Performance By A Female Actor In A Drama Series
Kathy Bates, "Harry's Law"
Glenn Close, "Damages"
Jessica Lange, "American Horror Story" Yes! Of this group, absolutely, the Golden Globe winner should be repeated here. Should Win/Will Win
Julianna Margules, "The Good Wife"
Kyra Sedgwick, "The Closer" Not sure how this nomination even got here.

Outstanding Performance By A Male Actor In A Comedy Series
Alec Baldwin, "30 Rock" Consistently remarkable. Should Win
Ty Burrell, "Modern Family" I love this guy and I'm pretty sure the "Modern Family" hype isn't over yet. Will Win
Steve Carell, "The Office"
Jon Cryer, "Two and a Half Men"
Eric Stonestreet, "Modern Family"

Outstanding Performance By An Ensemble In A Drama Series
"Boardwalk Empire" Great group of people.
"Breaking Bad" There is not one weak link in this chain. Should Win/Will Win
"Dexter" For this last season?
"Game of Thrones" A cool show but it's less about the acting.
"The Good Wife" Really?

Outstanding Performance By An Ensemble In A Comedy Series
"30 Rock"
"The Big Bang Theory"
"Glee"
"Modern Family" Of these nominees, this is the best, and they've got momentum from the Golden Globes. Should Win/Will Win
"The Office"

Outstanding Performance By A Stunt Ensemble In A Television Series
"Dexter"
"Game of Thrones"
"Southland" Great stunts that subtly help propel the story.
"Spartacus: Gods of the Arena" This is a stunt-driven show, for it to not win would be very strange. Should Win/Will Win
"True Blood"