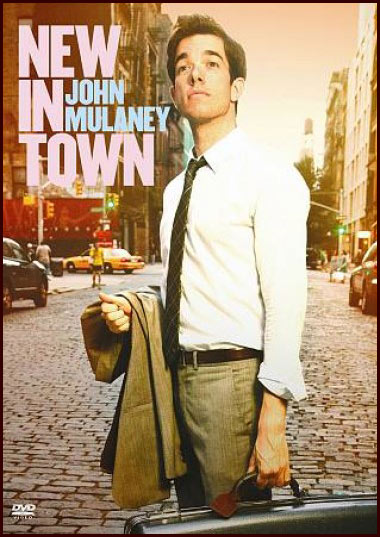 "John Mulaney: New In Town" premieres tonight on Comedy Central at 10pm - watch it!
Four years ago I interviewed John Mulaney as he began a run of standup shows in Los Angeles and the West coast, shows that ended up being the basis for his album, The Top Part. Back in August I was very pleased to get an invite to be at the taping of Mulaney's new hour of material at the Skirball Center in New York City. The end product of that taping premieres tonight at 10pm on Comedy Central, "John Mulaney: New in Town."

Earlier this week I had a conversation with the standup comedian and celebrated "Saturday Night Live" writer who told me how the special came about.

LAist: You did two tapings, how do you piece them together into one special? What are some of the things you look at?

John Mulaney: For the most part it's all one show, apart from a couple moments, that were really small. Like when we would have a camera in a certain place that would capture an act-out from me that looked a little different. For the most part it was all from the later show. In doing the hour there was a lot of tags to every joke, and there were a lot of jokes in every bit. So there were a lot of those tags I enjoyed from the first taping.

Were you presented with any dilemmas of what bits of footage you would keep over another?

John Mulaney: Not really, we had good coverage, and a great director named Ryan Calito and it all came together. When I walked off-stage after the first taping going "That was great, that's it if we need it." So I was very pleased after the first show and then for the second show, what was nice about that was, you want it to be as polished as possible but, part of standup is being loose and having a good time yourself and that translates to the audience. So after that first taping I just wanted to have a great time in the second one.

In preparing for the special, I'm sure you did a lot of work around town, but how do you translate something you do in a club to a venue like the Skirball Center, which has a pretty good-sized stage and auditorium. What kind of adjustments did you make in your performance?

John Mulaney: Pace is a little slower in a theater, it's actually, and this may sound strange, but it's a little more comfortable in a theater talking to a large group of people. They are extremely focused because they're just sitting in chairs staring straight at you. A lot of comedy clubs are set up with people sitting at little tables and you have everything from the way they are seated to them ordering or taking a sip of a drink, these can make a comedian go harder and faster in a club. Actually, even though it's bigger and the pressure might be on more, you can be a little more relaxed in front of a big crowd like that. I had also done a lot of one-hour shows at the UCB Theatre to get ready, just doing solo hours. I also went on the road a lot, doing three or four nights in a different city, doing an hour per show, a couple shows per night. Then I was also doing little sets in New York and L.A. working on certain sections.

So what you put on display for us in this special are these great stories, it's not a collection of one-liners.

John Mulaney: Yeah, I do longer runs on things, a lot stories. I really like one-liners, I like a lot of different kinds of standup but I've always been long-winded.

I have to ask about your closing bit, which I don't want to spoil for anybody, but it deals with a medical issue [Laughs] and you spend quite a chunk of time on that bit. First of all, is it a true story? And how long did it take for you to develop it?

John Mulaney: Yes! It is a true story. I first told that story the day it happened something like 2 years ago. It happened, I fainted, well wait, maybe don't write that I fainted, but I was at the doctor going through this medical saga, I left the free clinic, I went to a show I had to do, called "Sweet," written by Seth Herzog, but I was so thrown off my game that I could only talk about what had just happened. I was like someone who had just been discovered shipwrecked and was like "I have a tale to tell you!" So I told it, and it was not great, as I still looked ashen. Then a year and a half later I was thinking about it or told a friend about it and I started telling it on stage again. From there it was a few months of shaping it and trying to make every detail of it as real as possible, all those details are true, it all happened in that order. So I had to make every part of that sing in its own way. Then I would tell it at shows and discovered that there was really no way of going back after telling it, you can't tell it and then step back and go on to a new bit, "So… I watch a lot of TV." I was happy to close with it because it's one of my most favorite things in the special.

It really is a great bit — it is so funny! I can't wait to see how people react to it.

John Mulaney: Oh, hey! You know what is the ending of that story that I have never told, because it isn't really a joke because it's just something that happened. So I walked out of that clinic after all that happened, and I slammed into someone… and it was Elijah Wood! [Laughs] I don't mean to imply that he was going in there, he was just on the street.

So how did your special get on Comedy Central vs on HBO or Showtime?

John Mulaney: I did my first special and album with Comedy Central and they just do a great job with standup, and have forever. They've always taken it very seriously and they treat it like what it is, one of the big cores of their channel. Specials premiere there like they are a special thing and that's cool for a standup, to be treated like that, it's one of the best vehicles for comedy. So I have always liked working with them and it was great working with them again.

They also seem to be taking advantage of their specials later at night, airing more of them unedited and we're getting more content as a viewer.

So what's going to happen on the premiere night? Are you going to have a viewing party.

John Mulaney: Oh yes! I will definitely have some people over. It's not like screening a short film for friends because the people in the audience laughed so even if my friends don't like it there's some built in enthusiasm and validation.

John Mulaney: Yes, "You see, they all liked it!" I'll say to my dear friends. [Laughs] But honestly, sometimes I hate watching myself and I've enjoyed watching this special as I was editing it.

—-
"John Mulaney: New In Town" premieres at 10pm on Comedy Central. For more on John, check out his website.