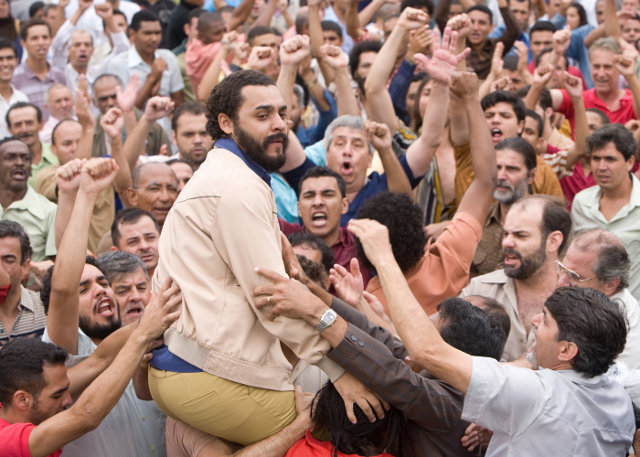 As an action star, Liam Neeson is a bit of a lone wolf: quiet, brooding & calculated. In his latest, the man vs. nature thriller The Grey, he leads a band of plane crash survivors against a pack of wolves. The film reunites Neeson with A-Team writer/director Joe Carnahan & producers Ridley & Tony Scott. While PETA says the very idea has them "seeing red", Carnahan told the LA Times his intent was to make audiences "respect wolves and by extension, nature itself more". Whichever side you fall on, film critics aren't howling, and The Grey distributor Open Road's already talking about a re-release later this year as part of a 2013 Oscar campaign.

We move towards diamonds (and the rough) with Man on a Ledge. The confusing crime caper hangs Sam Worthington out to dry in a suicidal spin on Dog Day Afternoon, where an ex-con's threat to jump to his death provokes a media frenzy. But it's all a ruse so that his team can steal a $50 million diamond! But that's another ruse that will somehow prove to the police that he didn't previously steal that diamond! I don't get it either. At least One For The Money has literary origins...

Profiling a sitting world leader is a daunting task. This is especially true when one is as adored domestically & abroad as Brazilian President Luiz Inácio Lula da Silva. His life story hits screens this weekend in Lula, Son of Brazil, Brazil's submission for the Academy Awards. Whereas Hollywood biopics tend towards psychological breakdown & skeletons in the closet, Lula tells a straight-forward story charting a young man's rise to prowess through hard work, gumption & devotion to his family.

Lula's struggle is entirely external & totally legit, from his dirt-poor childhood under an abusive, alcoholic father to the loss of limb & lover in his adult life. Yet, the creators of Lula, Son of Brazil make the curious decision of stopping in the mid-1980s, its subject imprisoned, with an end-title-card informing us of his eventual ascendance. Imagine if a film about Martin Luther King ended at Birmingham Jail. It feels more like the first part of a TV mini-series than a complete story. Lula's abrupt anticlimax undermines the film's inspirational tone, suggesting that true success in fact requires some off-screen magic.

Lula isn't without its strengths. For those unfamiliar with Brazilian politics (myself included), the film weaves newsreels of right-wing crackdowns & labor protests within its narrative to provide important background. Brief specks of film grain are the only indicator of where this footage ends & the staged shoots begin. Besides its art direction, the film boasts impressive performances from first-time actor Rui Ricardo Diaz as Lula & veteran Glória Pires as his mother. Their relationship has a genuine tenderness - any parent or child will find Lula a wonderful son, even if the film on the whole is lacking. Lula, Son of Brazil opens exclusively at Laemmle's Music Hall & Pasadena Playhouse.