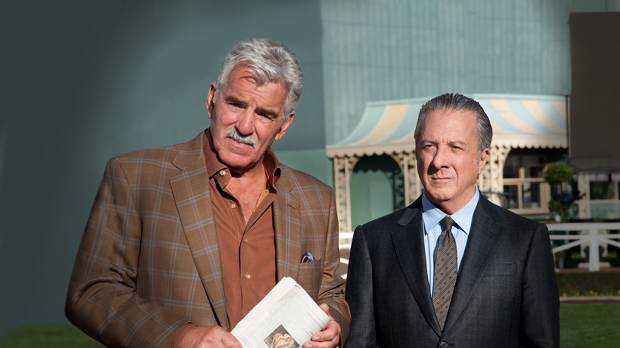 This Sunday HBO is premiering it's new series "Luck." Yes, we got a taste of it several weeks ago but now the series is officially rolling out. The creator of this series, David Milch, is also well known for creating "NYPD Blue," "Deadwood," and the shortlived "John From Cincinnati." The broad cast is led by Dustin Hoffman, Dennis Farina, Nick Nolte, John Ortiz, Kevin Dunn, and Kerry Condon (who was excellent as Octavia in HBO's "Rome") but there are almost 20 characters whose stories we follow in this tale of gambling, race tracks, horses, trainers, jockeys, gamblers, winners, losers, and big time players.

I've watched 8 episodes of the show so far and I have to caution viewers that there is a glacial pace to the show. People into reality TV, "American Idol," quick-cut garbage on the broadcast networks, and other self-inflicted ADHD devices will not be able to handle the deliberative pace of character development on this show. I do have to say that the time invested does pay off - just stick with it. Early on in the show there are many scenes that are the definition of deliberative as Dustin Hoffman's Chester Bernstein lounges on his bed in a suite at the Beverly Hilton and muses in long conversations with right hand man Gus Demitriou played by Dennis Farina, about his next moves, literally fleshing out the new character he will become since his release from prison.

This show seems to be the ultimate expression of Milch's desires. He's a longtime gambler, owns racehorses, and has been given a venue where he can have as much dialogue as he wants without having to worry about commercial breaks or pressure from the network. By dialogue, I mean that there's a ton of it, lots of scenes of guys sitting around, discussing how they're going to try to make it big, or just shooting the shit. There are regular bursts of action in the form of horses running training laps or racing, shot cinematically, with a horse's head sometimes taking up the entire screen, or a jockey's goggled face.

The key to making this series pay off for you is to be patient with it. While a horse race is just a minute of action, "Luck" explores every layer of planning that it took for that minute of action to occur. That race could have been the first and last race of a horse, that minute was the culmination of the life of that animal. That race could have been the first professional race for a jockey who had to first somehow get an agent, and then get approved by a horse owner, and then actually be placed on the schedule to ride the horse.... if everybody remained healthy and the jockey made weight. Who financed the race? Put up the money for the purses? Who paid the bills to keep the track lights on? "Luck" answers these questions and lets you in on the interconnected stories of everybody from the vet in the stables to the "businessmen" seeking to influence the races or at least tap into the money flowing into the track every day.
—-
On a sad note, tonight is the series finale of NBC's "Chuck" at 9pm. The show was constantly brought back from the brink and amazingly it wasn't allowed to crash and burn, rather this controlled descent and gentle landing was provided for because the fans demanded it.

It's also sad to note that another fan favorite, Fox's "Fringe," is facing a similar fate to the one "Chuck" was always up against. Fox has bounced "Fringe" around on the schedule and has put it where many TV shows go to die: Friday nights. Last week "Fringe" tied its record for lowest viewership and I haven't seen any impact from Twitter or Facebook campaigns exhorting followers of the show to increase viewership so I fear that the show faces a less graceful departure than "Chuck."
—-
Also on Sunday is the season finale of E!'s "After Lately" at 11pm. It will be filled with TV star cameos and the sneak peak I've seen ensures that it's another great episode. E! really needs to do something about throttling this show to a measly 8 episodes for a season and I'm hopeful that the move of the production studio to roomier surroundings also means that there's room for this series to stretch its wings.
—-
Tomorrow look for our interview with John Mulaney about his new Comedy Central special, "New In Town," which premieres on Saturday at 10pm. Sunday we'll post our picks for the SAG Awards TV categories.
—-
The TV Junkie Must-Watch Plan: Tonight - "Real Time With BIll Maher," "Chuck," "Portlandia," "The Increasingly Poor Decisions of Todd Margaret." Saturday - "John Mulaney: New in Town." Sunday - "18th Annual Screen Actors Guild Awards," "Luck," "Shameless," "House of Lies," "Californication," "After Lately."

8:00pm Chuck NBS - Chuck Versus Sarah Sarah returns from a mission with a big secret; Ellie and Awesome get a life-altering opportunity.

8:15pm The Invisible Man TCM - (1933) The serum that makes a scientist (Claude Rains) invisible has madness as a side effect.

9:00pm Chuck NBC - Series Finale. Chuck Versus the Goodbye Chuck gets his family and friends to help stop Nicholas Quinn from destroying what he has built.

9:00pm Fringe Fox - Forced Perspective Olivia copes with an ominous warning from the Observers; Peter and the team track a girl with the ability to predict death.

10:00pm Portlandia IFC - Grover Brendan and Michelle tries to get their son into a prestigious school.

10:00pm Bering Sea Gold Discovery - The gold rush is on in Nome, Alaska; piloting dredges that attempt to harvest gold from the bottom of the frigid Bering Sea

10:30pm The Increasingly Poor Decisions of Todd Margaret IFC - In Which Todd Accidentally Learns a Secret and Brent and Doug Get Closer to Furt
Todd seeks refuge in a pub and participates in a bachelorette party.

10:30pm Fashion Police E! - It's another great episode of Joan Rivers & Co., this time slavering for what will surely be idiotic fashion at the SAG Awards this weekend.

8:00pm Luck HBO - Series Premiere. Ace Bernstein is released from prison after three years; four racetrack junkies make a bet that could be worth millions.

9:00pm Shameless Showtime - A Beautiful Mess Fiona deals with the consequences of sleeping with Craig Heisner; Debbie develops a stress-rash.

9:00pm The Good Wife CBS - Another Ham Sandwich Wendy Scott-Carr presents her evidence against Will in an effort to send him to prison; Eli and Stacie Hall face off.

10:00pm House of Lies Showtime - Mini-Mogul Marty brings Roscoe to his next job in San Francisco; Jeannie reacts to her recent engagement.

10:30pm Californication Showtime - Waiting for the Miracle Hank is forced to invite ex-girlfriend and arsonist, Carrie, to a dinner party.