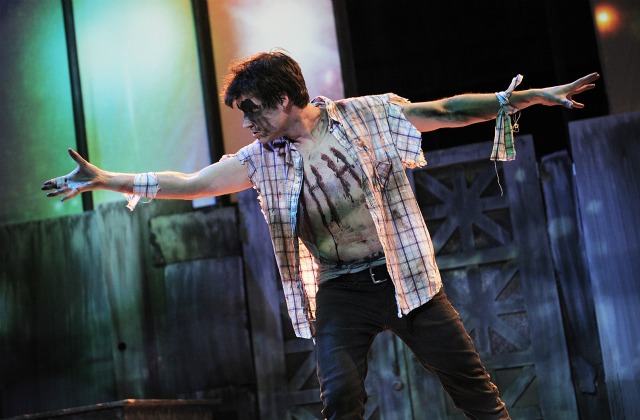 Matt Pelfrey's testosterone-charged satire No Good Deed brings an action-packed comic book to life on stage at Inside the Ford. The dark, clever and stylish production uses ultraviolence, projected graphic art, excellent fight choreography and original music to tell a warped and ultimately ironic good-versus-evil tale punctuated by the uglier side of American culture. No Good Deed initially seems to struggle to find its niche, but by Act Two, Pelfrey's play fully redeems itself through quirky humor and full-circle connections that validate the rest of the work.

The capable and elastic cast of No Good Deed brings both subtlety and bravado to their performances, although at times, fancy technical effects and battle scenes overshadow the actors. It is difficult to garner an emotional connection to the characters, but several performances shine through the bells and whistles. Nick Cernoch leads the cast as Josh Jaxon, a conflicted and abused high-school student that must deal with a major change in his social status. As both a hero and antihero, Cernoch easily makes a bold transition feel natural. He guides Jaxon away from an appropriately subdued modality as a bullied kid to an energized, engaging and exciting alter-ego realized through a drug-induced multi-dimensional fantasy. 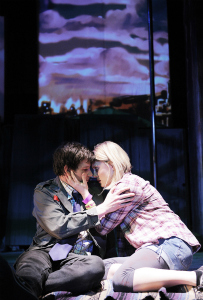 Nick Cernoch and Katie Marie Davies in 'No Good Deed' (photo by Anthony Masters Photography).
The complex staging of No Good Deed must be a nightmare to direct, but Damaso Rodriguez smoothly orchestrates the entire production with raw grace and a little kitsch. In fact, Rodriguez has crafted an indie-version of Broadway's Spiderman, minus all of the Spiderman failures, of course. Brian Danner's fight choreography is perfectly executed, conceptualized and is a huge audience draw. Scenic design of John Icovelli, costuming by Christy Hauptman, graphic design of Ben Matsuya and original music composition of Doug Newell contribute tremendously in capturing the essence of a great comic book.

Character depth takes a backseat to social commentary in Pelfrey's script, but his writing technique ultimately works quite well and seems to be a social experiment in and of itself. No Good Deed is brimming with violence that initially shocks the audience, then leaves them stunned, and ultimately numbingly induces blatant laughter as the violence becomes increasingly more tragic. Ironically, the audience becomes that which is being satirized on the stage. Perhaps it is this looking-glass quality is that makes Pelfrey's work a good play.

The 20-something dudes that really like comic books and video games and seeing people get their asses kicked would totally think No Good Deed is the most awesome play of all time - ever.

No Good Deed is playing at Inside the Ford through February 26. Tickets are available online, via phone at 323-461-3673, or at the box office: $12 to $25 with several pay-what-you-can performances.