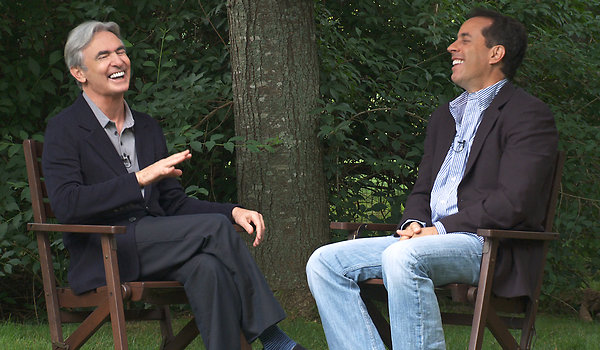 Jerry Seinfeld is interviewed by David Steinberg in tonight's premiere of "Inside Comedy" on Showtime.

Tonight Showtime is launching another amazing comedy series called "Inside Comedy" at 8pm. Thankfully they are repeating it at least a couple more times tonight because I don't want to miss in-depth conversations with comedy icons Jerry Seinfeld and Don Rickles hosted by David Steinberg. The show is very different than Showtime's "The Green Room With Paul Provenza" and I hope Showtime realizes that and keeps both of them. Whereas "The Green Room" is an all-out, no holds barred discussion and confrontation of what is comedy in, literally, a theatre in the round, as compared to the much more sedate and respectful (perhaps uptight?) format of "Inside Comedy" with its very polite audience. I've been in an audience for "The Green Room" and while I can guarantee that experience is a lot more fun than the experience must be at "Inside Comedy," both shows have their place. If Showtime keeps them both then it shows how serious they are about becoming the premium cable destination for comedy.
—-
About this time next year, get ready to see the first spinoff of the US version of "The Office" featuring Rainn Wilson's Dwight as the main character. The spinoff was created by Wilson and "The Office" executive producer/showrunner Paul Lieberstein who also plays Toby.
—-
Tonight keep your eyes open for a double dose of "30 Rock," another spectacular episode of "Archer," and what should be a great edition of "Chelsea Lately" (if it's possible to top Chris Franjola's work on the roundtable last night): we've got perennial fave (and super nice guy) Josh Wolf, with the hyperactively psychotic Bobby Lee, and the wonderful recent addition of Liz Carey - I don't know where they got her, it says she's an actress, but she's amazingly funny and well worth checking out. Let's hear it for Ross Matthew's capably hosting this week even though he was overly gushy about some stupid "Housewife" guest last night - he can be forgiven.
—-
The TV Junkie Must-Watch Plan: "30 Rock," "Parks and Recreation," "30 Rock," "Up All Night," "Archer," "Inside Comedy" (on late repeat), "Chelsea Lately," "Jimmy Kimmel Live"

8:30pm Parks and Recreation NBC - Bowling for Votes After receiving feedback from a focus group, Leslie and Ben plan a casual bowling party; April, Jerry and Chris compete to see who can raise the most money for Leslie's campaign.

8:30pm Rob CBS - The Pillow When Rob and Maggie have a disagreement over a pillow, Fernando and Rosa try to teach them about the signifigance of their first fight; Hector must get a job.

9:00pm 30 Rock NBC - Liz and Jack face off over her contract; Kenneth changes his page assignment; Tracy and Jenna get a job entertaining at a bar mitzvah.